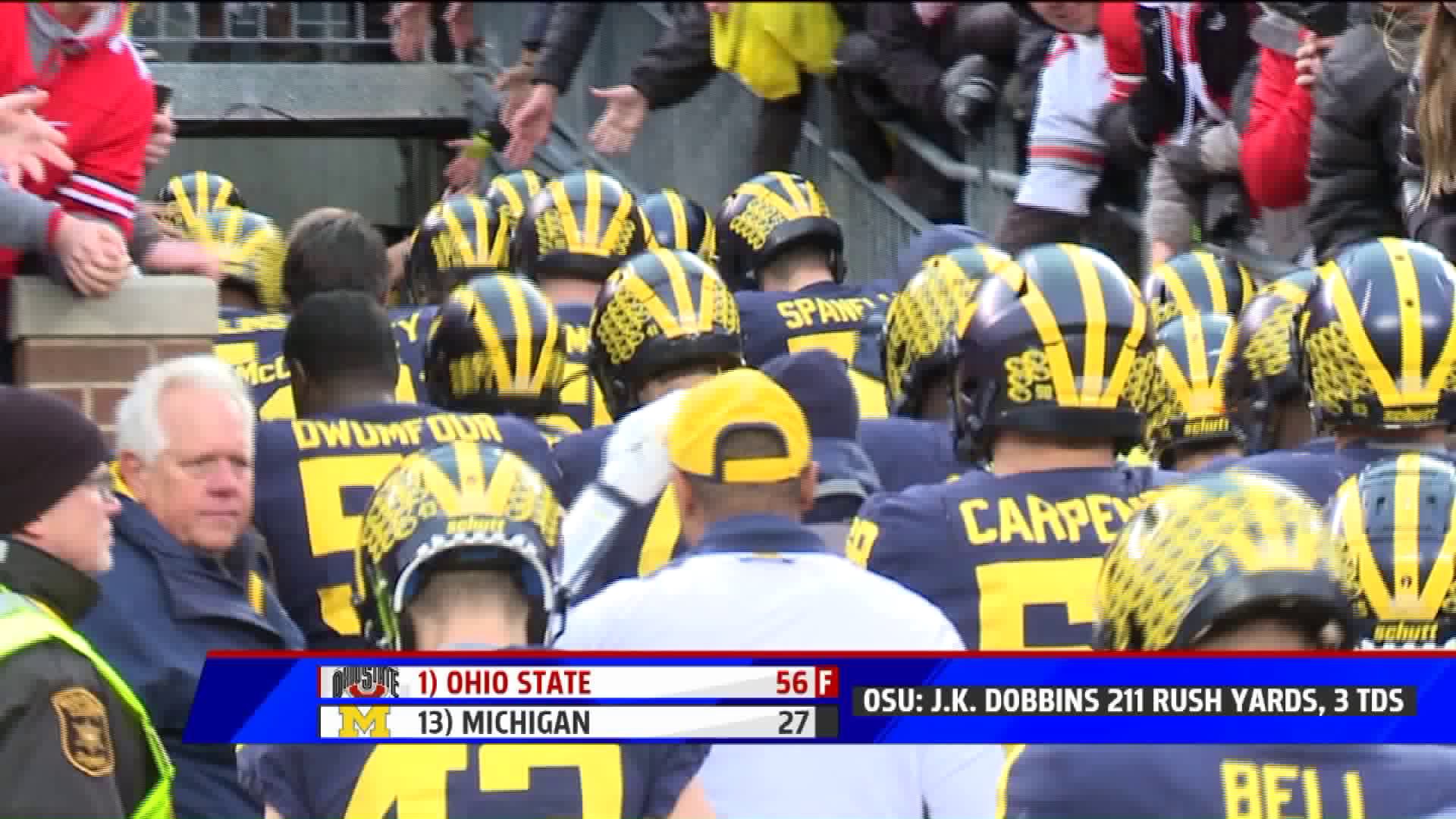 The Wolverines entered the contest at 9-2 and rated 10th in the nation while the Buckeyes came in at 11-0, ranked No. 1 and as 8-point favorites. Michigan led the series 58-50-6 but Ohio State had won the last seven meetings between the pair.

The game marked the regular-season finale for both squads.

The hometowners received the opening kickoff and drove steadily downfield before taking a 6-0 lead with 11:43 showing on the clock when Giles Jackson galloped 22 yards on an end-around  and Rockford's Quinn Nordin missed the extra point. But the Buckeyes quickly retaliated, going up 7-6 on Dobbins' 5-yard run with 8:50 left in the opener.

OSU was in command 14-13 at the initial break during a hectic final 1 1/2 minutes after quarterback Justin Fields hit Chris Olave with a 57-yard TD pass at the 1:27 juncture and then Wolverine signal-caller Shea Patterson connected with Donovan Peoples-Jones on a 25-yard scoring aerial and Nordin tacked on the PAT with only 19 seconds to go.

The second stanza saw the Buckeyes take control 21-13 on Dobbins' 6-yard run at the 10:12 mark. Michigan then drove deep into opposing territory before Patterson fumbled the ball away. It was soon 28-13 on Dobbins' third touchdown -- a 5-yard run with 3:15 until intermission.

Nordin booted a 23-yard field goal with just 19 seconds remaining to trim the bulge to 28-16 at halftime.

Ohio State left the locker room and jumped out 35-16 on a 6-yard pass from Fields to fifth-year senior K.J. Hill with 11:18 remaining in the third and then 42-16 when Fields hit freshman Garrett Wilson with a scoring strike at the 3:46 mark.

Nordin's 45-yard field goal sliced the deficit to 42-19 with 2:33 left in the third quarter, a score that stood until the final break.

With 14:23 to go in the game, Michigan's Hassan Haskins scored on a 2-yard run and then ran in the two-point conversion to slice the gap to 42-27. But Austin Mack soon scored and the Buckeyes once again upped the count to 49-27.

Dobbins got his fourth running touchdown with 6:30 on the clock, giving Ohio State a 56-27 lead, which stood until the final gun.

The ninth annual Big Ten championship game between the East Division and West Division winners is scheduled for 8 p.m. next Saturday at Lucas Oil Stadium in downtown Indianapolis. The victor will earn the Amos Alonzo Stagg Championship Trophy.

As the East Division champion, Ohio State will be the visiting team in that contest. The home team will be either Minnesota or Wisconsin, who meet later Saturday for the West Division title.