DAYTON, Ohio (AP and CNN) — Nine people were killed and at least 26 injured Sunday in a shooting in a popular nightclub district of downtown Dayton, Ohio, police say.

Officers killed the lone suspect after he fired for less than a minute from a ".223 high-capacity" gun, and he had additional magazines with him, Mayor Nan Whaley said. The .223 caliber is used in rifles like the AR-15 assault rifle used in previous mass shootings.

On Sunday afternoon, the shooter was identified as 24-year-old Connor Betts. Police said one of the victims was his 22-year-old sister, Megan. 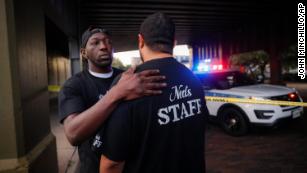 Witnesses comfort one another at the scene of a mass shooting in Dayton, Ohio.

The event followed by 13 hours a shooting that left 20 dead in El Paso, Texas.

The suspect has not been identified. Carper said the shooter fired multiple rounds from "a very large gun, in technical terms." The shooting happened as the suspect was making his way toward a bar called Ned Peppers, Decker said.

Someone from Ned Peppers grabbed the barrel of the rifle, and the shooter "picked up a handgun and was willing to continue shooting," Decker said, when police arrived and killed the shooter.

No officers were injured, Carper said. 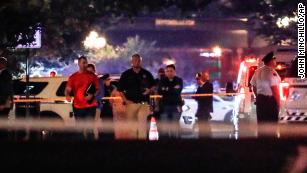 "In less than one minute, Dayton first responders neutralized the shooter," Whaley said.

"The question has to be raised, why does Dayton have to be the 250th mass shooting this year?"

Police believe that the suspect acted alone and that there is no remaining threat to the community, but the investigation is ongoing, Carper said, and the FBI is assisting. The motive for the shooting was not immediately clear.