(FOX News) — These foods are extreme…ly out of touch with recent studies of what people should be eating, according to FOX News.

The 2019 “winners” of the annual Center for Science in the Public Interest (CSPI) Xtreme Eating list are in — and they may convince you to opt for a salad tonight.

CSPI, founded in 1971, is a science-based consumer advocacy group that promotes healthy eating. Each year, the organization ranks restaurant dishes with some of the highest caloric, saturated fat and/or added sugar values in the industry.

The 2019 round-up features dishes from a few old favorites, like Cheesecake Factory and Chili’s, which routinely show up on the annual reports, along with some newcomers like Maggiano’s and Topgolf.

Sonic kicks off the list with its large Oreo Peanut Butter Master Shake. The 1,720-calorie bomb, with 48 grams of saturated fat and an estimated 62 grams of added sugar, was dubbed the “Disaster Shake” by CSPI.

Next on the list is Cracker Barrel’s 1,530-calorie Country Boy Breakfast, which features three eggs, fried apples, hash browns, sirloin steak, country ham (or pork chops) and biscuits with jam and gravy — and comes loaded with around 4,730 mg of sodium. According to the Food and Drug Administration, an adult should limit their daily sodium intake to less than 2,300 milligrams a day.

The only item that bested Cracker Barrel, in terms of sodium, was the Jimmy John’s 16-inch Giant Gargantuan sandwich. The five-meat, 2,190 behemoth has 7,720 mg of sodium, or nearly three-and-a-half times more than is recommended, daily, for an adult. 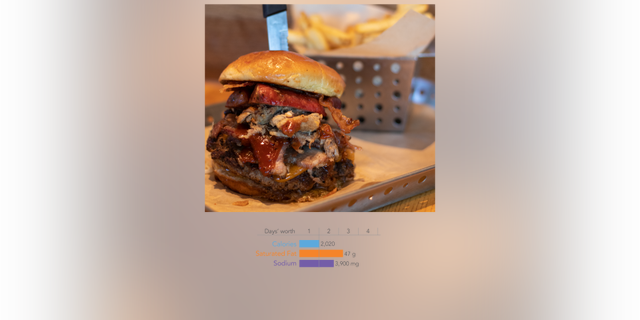 Apparently, 2019 was a big year for five-meat foods, as Chili’s also made the XTreme Eating List with its 2,020-calorie Boss Burger, stacked with smoked brisket, rib meat, sausage, bacon and a hamburger patty. The item also boasts 3,900 mg of sodium.

After you’ve had your dessert – and breakfast and lunch – the list moves on to dinner with Italian chain Maggiano’s Today & Tomorrow Pastas that all clock in at about 1,500 calories with 40-plus grams of saturated fat. 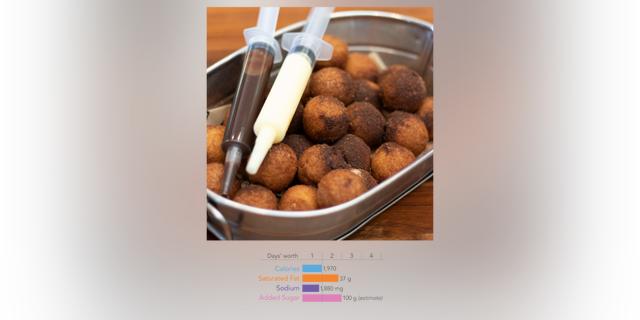 The Injectable Donut Holes from Topgolf, a driving range and sports bar chain, made the list for having nearly 100 grams of added sugar. (CSPI / Topgolf)

Topgolf, Dave & Busters and Cheesecake Factory also landed on the list for their sweet fare.

The Injectable Donut Holes from Topgolf, a driving range and sports bar chain, made the list for having nearly 100 grams of added sugar. However, there is a strong chance you’re sharing the 24 holes (and 1,970 total calories) with friends.

Cheesecake Factory was featured for its Cinnamon Roll Pancakes, which are offered at brunch — likely with a side serving of a midday sugar crash. The 2,040-calorie stack packs a whopping 51 grams of saturated fat and, after adding the rich icing and butter-infused syrup, about 137 grams of added sugar.

Dave & Busters completes this year’s roundup with their Chicken & Waffles Sliders, which are served with tater tots — and 2,340 calories and 3,420 mg of sodium, as well as 38 grams of saturated fat and 98 grams of added sugar. 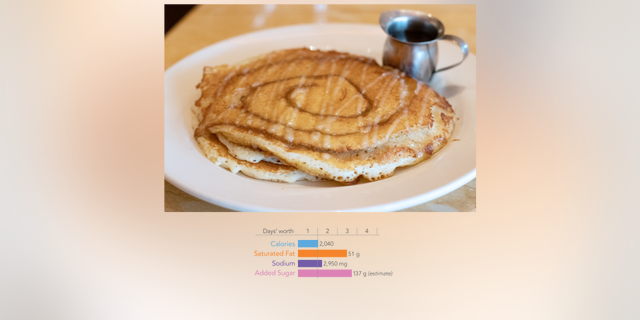