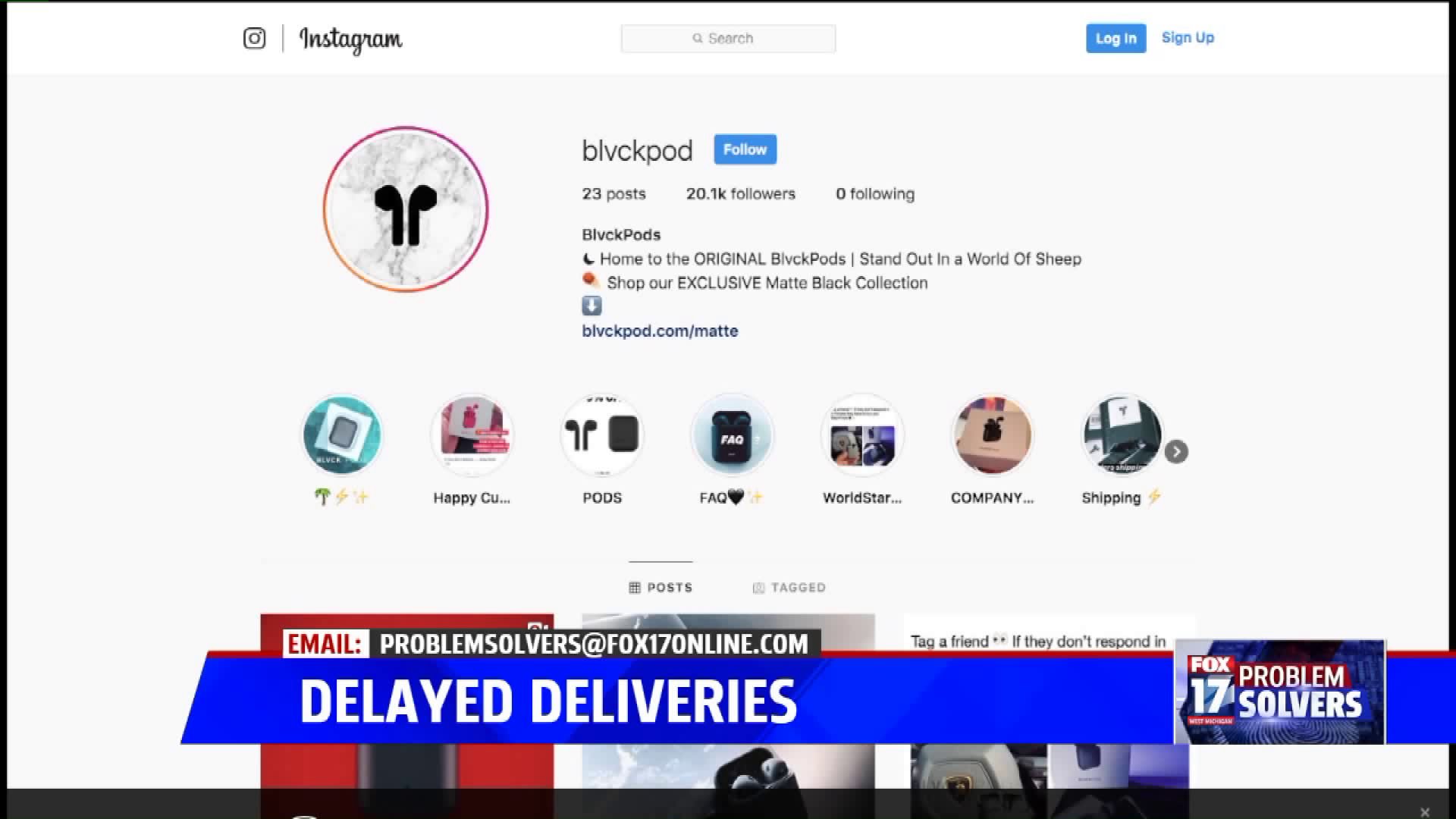 GRAND RAPIDS, Mich. — An online business based in Grand Rapids is facing complaints from across the globe, and FOX 17 has learned it’s allegedly run by two teenagers.

After waiting weeks and weeks for wireless Bluetooth earbuds he ordered online, David Wilkinson found himself among the growing number of customers frustrated with a company called Blvck Pods.

The business advertises on Instagram and Facebook. People have posted complaints about not receiving a product,  but had their messages ignored, blocked and emails bounced back.

“April 12, I ordered my product that was supposed to be delivered within 10 days, and here we are, coming up on 50 days later and no product," Wilkinson told FOX 17 over Skype.

“The alarm really went off for me when they started deleting those negative comments," he recalled.

Like others, the Salt Lake City, Utah resident noticed the Grand Rapids address on the bottom of Blvck Pods' website. So he searched for local news stations and reached out to the FOX 17 Problem Solvers for help.

The address leads to a home with three apartments. A woman who lives downstairs said she has no idea why her address is on the site. A man who lives upstairs was just as surprised.

"That's definitely the address though. It's the right zip code as well," the resident said.

Further digging reveals the business is registered through the State of Michigan, as well as Kent County to an Angel Gonzalez. The listed address took the Problem Solvers to a home around the corner. A gentleman came to the balcony.

Gonzalez explained his son co-owns the business with another teen and said the address listed on the website is a typo. He owns the building next door to the apartments, as property records also indicate.

"These are kids. These are two 16-year-old kids. It's him and another buddy who have been doing this for the last two months. I can tell you I know that the manufacturer of the pods that they're using is obviously out of China. So I know that they were having some issues with that," he said.

Gonzalez said the item is shipped directly from the manufacturer, and that’s where part of the problem lies. The man called his son, Isaiah, who said he's turned off the advertisements in order to take care of existing orders with his supplier.

Gonzalez said the product will start being shipped from fulfillment centers in Idaho and Los Angeles instead of China.

Troy Baker with the Better Business Bureau of Western Michigan said, "The trouble has become, basically, communication and shipping and that happens a lot. It does happen."

He said Blvck Pods has also ignored the BBB's attempts to connect and address complaints it's received. That's something Baker said could mean trouble for the business in the future.

"The real test of a business though is how they deal with it and communicate with consumers when these problems come up," Baker explained.

Gonzalez said everyone’s orders should be shipped in the next two weeks and Wilkinson will be patiently waiting.

Wilkinson said, "You need to communicate with your customers. You can’t go silent. You can’t delete negative comments if you don’t have something else to back it up with.”

"If you are legit, let people know what’s going on," he said.

The Problem Solvers will be following up with the company and customers in a couple weeks to make sure those shipments are sent as promised.

If people have issues with a business or items they’ve purchased, we recommend that they reach out to the business directly or report them using our built-in feedback tools. Our teams review these reports and work quickly to remove account that don’t follow our policies. https://help.instagram.com/494582480904711?helpref=faq_content

Are you affected? Send an email to problemsolvers@fox17online.com and join our Facebook group.