The blast happened at AB Specialty Silicones in Waukegan, about 40 miles north of Chicago,police said. The company describes itself as a manufacturer of specialty silicone chemicals. 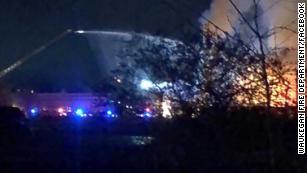 The Waukegan Fire Department on Facebook urged people to avoid the area.

The search for the other two missing people has been suspended due to dangerous conditions and concerns about structural stability, Lenzi said.

The building’s owner and emergency officials will bring in some “heavy-duty equipment” to remove debris.

The fire has been extinguished, and hazardous materials technicians and other teams are on the scene and searching, Lenzi said. No cause has been determined, and the state fire marshal will assist with an investigation, he said.

Florip said the plant was open at the time of the explosion.

Lenzi said everyone affected was an employee working at the time. Four were taken to area hospitals with moderate to serious injuries, officials said. Two others were seen but requested no treatment.

Authorities said the damage is estimated to top $1 million.