Wind, rain, snow, and thunderstorms on the way 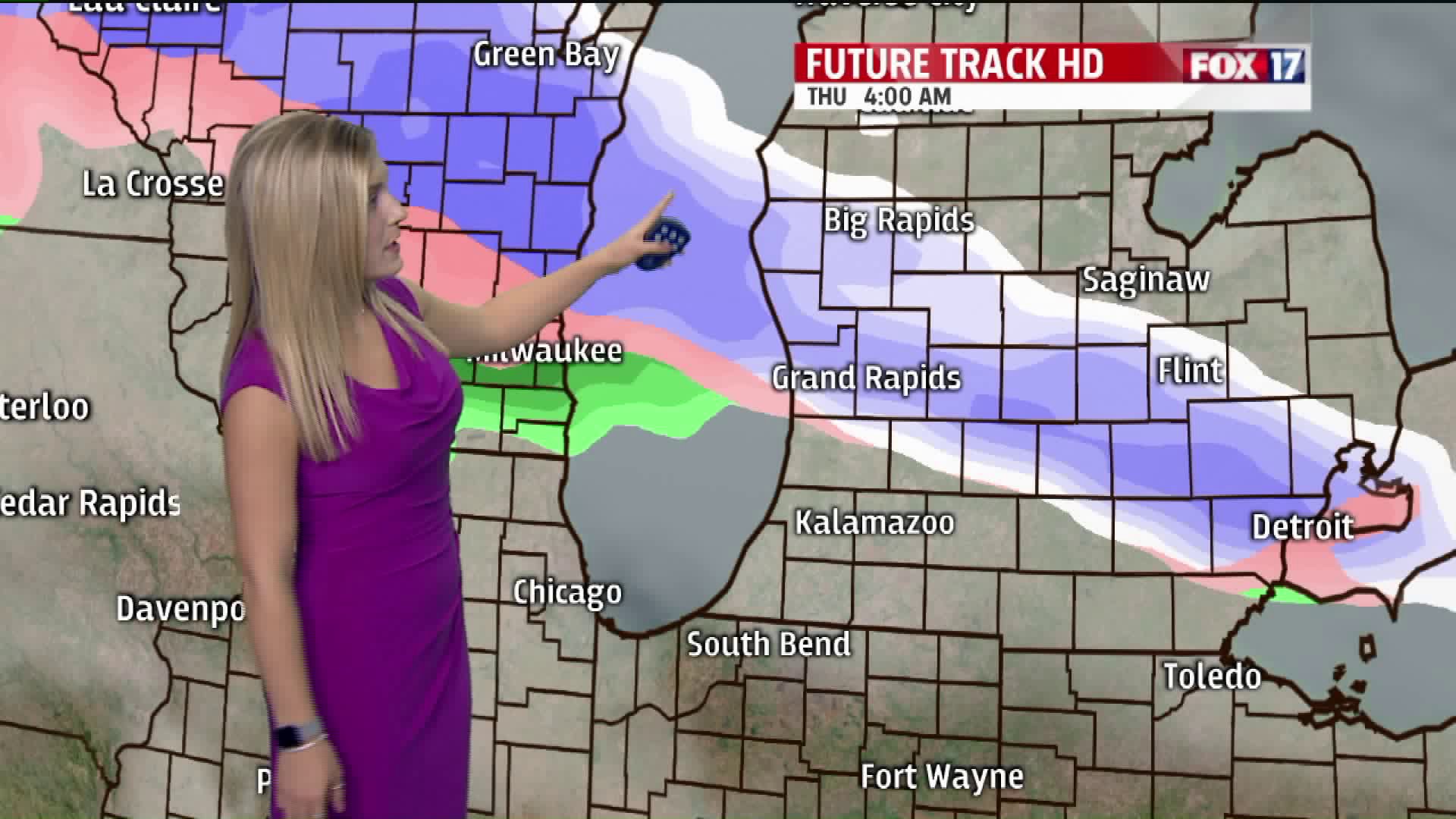 WEST MICHIGAN -- In a detailed post on Monday, I outlined what was coming our way this week with a huge developing storm system over the front range of the Rockies. Read that story here. Blizzard warnings, winter storm warnings, and high wind watches have been posted out west with this system for more than a dozen states. I'll reiterate...southwest Minnesota as well as South Dakota and western Nebraska will see blizzard conditions and up to 18" or so of snow. Clearly, we are NOT getting the worst of it!

A Winter Weather Advisory starts Wednesday evening at 9 o'clock for Oceana, Newaygo, Muskegon, Montcalm, Ottawa, Kent, Ionia, Allegan, Barry and Eaton counties until Thursday morning at 10 o'clock. Rain showers transitioning to a wintry mix and possible ice then transitioning over to snow. Travel for your Thursday morning could be difficult.

Michigan will remain on the front side, or warm sector part of this storm, which puts us in mainly a rain event. While rain showers may develop as early as Wednesday late afternoon/evening, much of that precipitation is expected to transition to snow Wednesday night into Thursday morning. See image below valid for 6 P.M. Wednesday.

The next image below is valid for midnight on Thursday. Note the "blue" over much of the area, which shows the rain that has changed to snow.

By the time our morning commute arrives Thursday, we may be dealing with about 1" to 3" of snow from Grand Rapids northward. There's also the possibility of some light freezing rain in a few locations that dip at or below 32 degrees. So yes, some light icing is possible too. The map below shows what things are expected to look like at 6 A.M. Thursday. You'll notice the winds will start to ramp up out of the east at about 15 to 25 mph with higher gusts.

While we have the chance for rain showers on Thursday, I believe much of the day will be dry. We may, in fact, see a little sunshine during the day but with windy conditions. Our best chance of heavy, steadier, widespread soaking rain arrives Thursday night into Friday morning. There may even be a few strong thunderstorms that move through during that time. See image below valid for 6 A.M. on Friday.

Friday afternoon actually looks dry with perhaps some clearing possible, but cooler temperatures. We discussed snow, but total rainfall is expected to be between one and two inches. See precipitation map below.

The scope of this system is huge...affecting several states. The colors on the map below denote some type of watch, warning, or advisory. Michigan is under a Winter Weather Advisory starting  Wednesday evening at 9 o'clock for Oceana, Newaygo, Muskegon, Montcalm, Ottawa, Kent, Ionia, Allegan, Barry and Eaton counties until Thursday morning at 10 o'clock. Make sure to stay up on later forecast. Drive safe. Get more details at www.fox17online.com/weather.

The heaviest snow with this big winter storm will NOT occur in Michigan. Ground zero? South Dakota. Up to 24" possible there. See total snow accumulation  map below. Blizzard warnings in effect for six states!