The incident happened about 4 p.m. Wednesday, March 27, according to city officials.

Surveillance footage shows two people coming to the site on skateboards and kicking them towards the site.

Photos show the couple at the site sitting on the wall, appearing to pry at the letters. 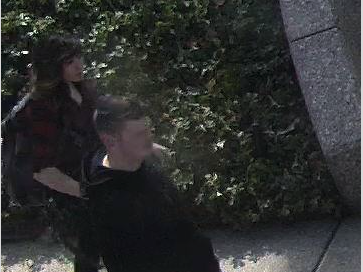 Police said the suspects successfully took off the letter "E" from "committed" off the wall. The museum had to spend $400 to replace the stolen letter.

The museum hopes the suspects are found, because they see the incident as an extreme act of vandalism.

He said he doesn’t believe the Ford family has been notified of the vandalism yet, but that they would be soon.

The museum is looking into taking legal action against the perpetrators as well.