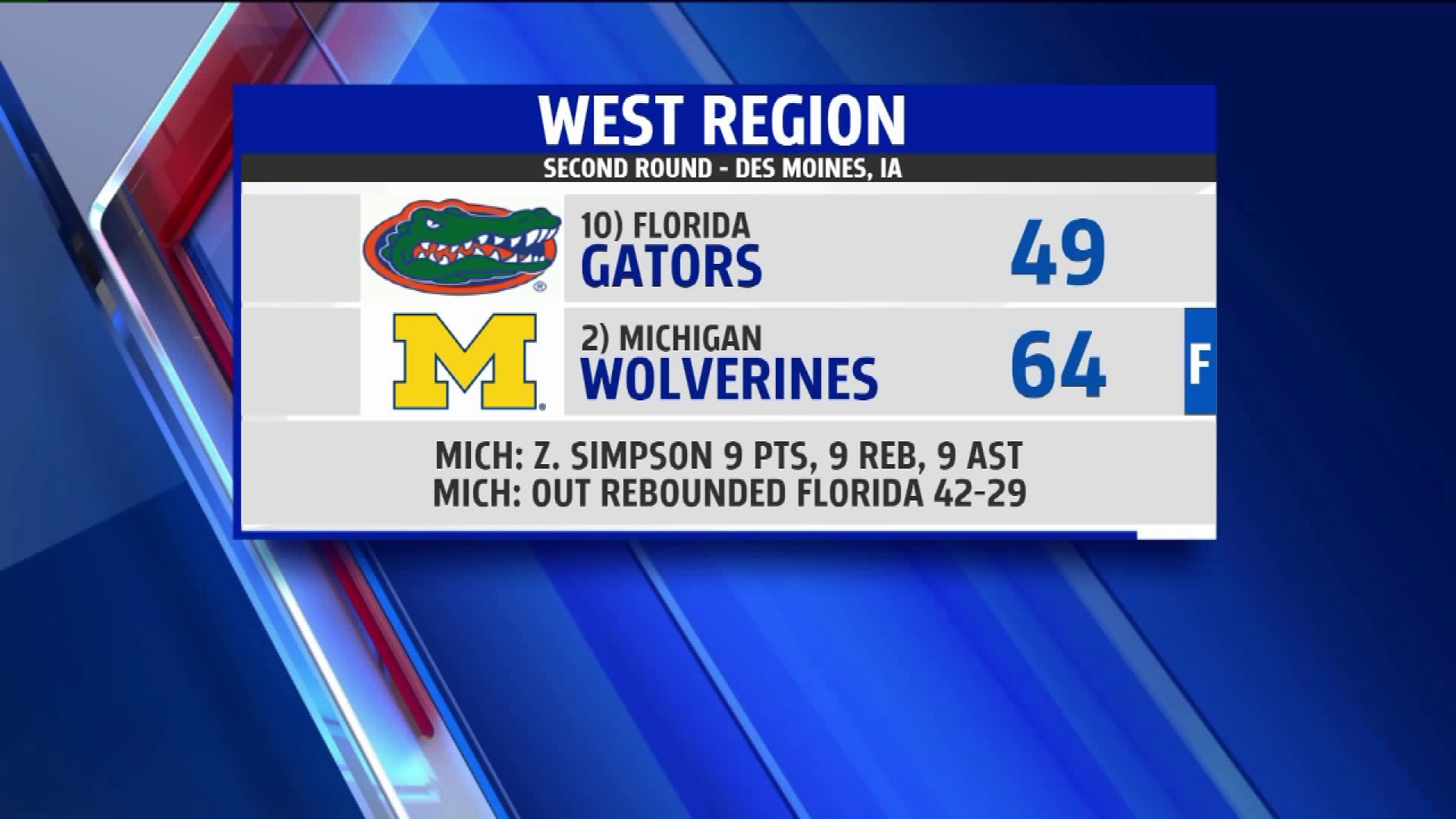 DES MOINES, IA. -- How sweet it is for Michigan. For the third straight season, the Wolverines advanced to the Sweet 16 of the NCAA Tournament.

Michigan flogged the Florida Gators on Saturday evening, 64-51, in a second-round game at the tournament's West Region.

It wasn't easy as the score indicates, though. After a see-saw first half that saw the Wolverines take a 32-28 lead to the lockeroom, Michigan opened up a double-digit lead against the resilient Gators, who kept clawing back to make it a close contest. .

Michigan will play the winner of Sunday evening's Texas Tech-versus-Buffalo game in the next round of the tournament.

The Wolverines made it to the finals last year, losing to Villanova in the NCAA Championship Game.

The second-seeded Wolverines held 10th-seeded Florida to 21 points in the second half, beating the Gators 64-49 to advance to the regional semifinals.

Jordan Poole led Michigan with 19 points. The Wolverines will face either Texas Tech or Buffalo in the next round.

Head coach John Beilein of the Michigan Wolverines celebrates with his teammates against the Florida Gators during the second half. (Photo by Jamie Squire/Getty Images)

Ja Morant scored 18 points and made all five of his 3-point shots, but Florida State dominated everywhere else and leads 12th-seeded Murray State 50-34 at halftime.

Defense is usually the Seminoles' forte', but they were sharp offensively, starting 8 for 11 from 3 and shooting 51.3 percent overall in the half. While Morant carried the Racers, fourth-seeded Florida State got contributions from all over: Mfiondu Kabengle and RaiQuan Gray had 11 points each and Terrance Mann scored 10, including a couple of highlight-reel dunks.

Ja Morant made his first five 3-point shots, to go with three assists, two rebounds, a steal and a blocked shot, but Florida State is getting contributions from all over and leads 12th-seeded Murray State 37-26 with 7:12 left in the first half.

The Seminoles are 7 for 10 from 3-point range, including three from RaiQuan Gray.

Morant's first shot of the game was a 3-pointer from up top that he swished. He followed it up with a no-look pass to Shaq Buchanan for a layup.

Morant briefly came up limping at one point, but he remained in the game and seemed OK.

No. 10 seed Florida is hanging with second-seeded Michigan midway through an NCAA second-round game in the West Region.

The Wolverines are controlling the inside and lead 32-28 at halftime, but the Gators' 6-of-12 shooting from 3-point range has kept it close.

Charles Matthews, Jordan Poole and Zavier Simpson have seven points apiece for the Wolverines. Big Ten newcomer of the year Ignas Brazdeikis has gotten off to a slow start, going 1 for 6 and sitting out the last 3:50 of the half with two fouls.

Phil Cofer was on the floor with his teammates for the playing of the national anthem before Florida State met Murray State in the West Region. The senior forward found out after Thursday's game that his father had died.

Cofer was not in uniform and was wearing a plastic boot on his sore right foot. He listened to the anthem with his head down and rubbed at his eyes. After the song was over, teammate Terrance Mann, standing next to Cofer, gave him a hug and a pat on the chest. The teams left the floor before introductions and some Murray State players came over to Cofer to give him a hug or pat on the back.

Cofer was on the bench wearing a warmup suit at the start of the game.

A couple of guys who played basketball together in grade school are on opposite sides in the second-round NCAA Tournament game between Florida and Michigan.

Gators freshman point guard Andrew Nembhard and Wolverines freshman forward Ignas Brazdeikis were teammates on a club team called the Panthers when they were in fifth and sixth grade in suburban Toronto. They also played together on the Canadian national team in the 2016 under-17 world championship.

Both are key cogs for their teams. Nembhard has started all 35 games and hit the winning last-second shot to beat LSU in the Southeastern Conference Tournament, a win that secured the Gators' at-large bid.

Brazdeikis is the Big Ten newcomer of the year award winner. He leads the Wolverines with 15 points per game.

Florida State forward Phil Cofer did not join his team on the court for its stretching session before Saturday's game with Murray State.

Cofer found out Thursday that his father, former NFL linebacker Mike Cofer, had died at age 58 after a long illness. Phil Cofer sat out the Seminoles' first-round win over Vermont with a foot injury that has been bothering him since the preseason.

The Florida State team and staff are all wearing black pins with the initials "MC."

Second-seeded Kentucky clamped down on Fletcher Magee and beat Wofford 62-56 in the second round of the NCAA Tournament. It was Wofford's first loss in 22 games.

Magee finished with eight points on 4-of-17 shooting. He missed all 12 of his shots from behind the arc.

Magee, who set the Division I record for career 3-pointers in the first round, missed his first 10 attempts from behind the arc against the Wildcats. Tyler Herro has been primarily responsible for guarding Magee.

Magee is 4-for-15 from the field. He hit seven 3s in the team's first NCAA Tournament victory, against Seton Hall.

Nathan Hoover has 19 points thanks mostly to four 3s, and the Terriers have kept it close despite a notable size discrepancy.

Central Florida's Johnny Dawkins was hesitant about coaching his son, Aubrey, when the younger Dawkins decided to transfer after two seasons at Michigan. But things could not have worked out much better for those two.

The ninth-seeded Knights will take on top overall seed Duke for a spot in the Sweet 16 on Sunday. Johnny Dawkins used to train Aubrey as a boy and teenager after his day job either as a Duke assistant from 1998 to 2008 or as Stanford head coach after that.

Dad was concerned the good father-son relationship might strain if Aubrey played for him, but friends and fellow coaches like Steve Alford said he shouldn't miss that experience.

Aubrey Dawkins, a redshirt junior, is averaging 15.1 points a game. Aubrey Dawkins has also loved the time together. He likes that his father treats him like the rest of his teammates.

"We don't see it as father-son," UCF center Tacko Fall said. "We see all of us as his sons."

A GoFundMe page has drawn more than $30,000 in donations for the family of Florida State forward Phil Cofer, who found out after Thursday's game his father had died after a long illness.

Mike Cofer, a former NFL linebacker, died at age 58. His son was expected to remain with the team for Saturday's second-round West Region game against Murray State, but it was unclear if Phil Cofer would play. He missed the Seminoles' first game against Vermont with a foot injury.

Kentucky has pulled ahead at halftime of its Midwest Regional game against Wofford.

The second-seeded Wildcats finished the opening half on a 10-2 run, going to the locker room with a 28-26 lead.

Kentucky is doing a good job on Wofford star Fletcher Magee, who has only two points on 1-of-6 shooting. The NCAA Division I career leader in 3-pointers has missed all four of his attempts beyond the arc.

It may be a No. 9 seed going against top-seeded Virginia on Sunday, but don't call Oklahoma a Cinderella.

In the South bracket, where three double-digit seeds survived the first round and the winner of Sunday's Oklahoma-Virginia game will play the winner of No. 12 Oregon and No. 13 UC Irvine, Sooners guard Christian James says the slipper doesn't fit his team.

James says Oklahoma expected to be in the tournament's second round even after a five-game losing streak during Big 12 play.

The senior was also part of the Oklahoma team that went to the Final Four in 2016.

A buzzer beater at the NCAA Tournament.

Tremont Waters drove around three defenders and flipped in a shot with 1.6 seconds remaining to give LSU a 69-67 victory over Maryland in the second round of the East Region.

Maryland rallied from a 15-point deficit in the second half, setting up the thrilling finish. Skylar Mays hit a 3-pointer with 40 seconds left, giving LSU a 67-64 lead, but Jalen Smith answered from the corner with 26 seconds remaining to tie it.

The first round of this tournament was a bit light on exciting finishes. New Mexico State's Trevelin Queen shot an air ball from the wing, missing a chance to beat Auburn, and Iowa State's Nick Weiler-Babb missed a 3-pointer against Ohio State that would have tied the game.

Waters took advantage of his opportunity. He ran the clock down, got a pick near the foul line and drove down the right side of the lane to make the game winner.

Third-seeded LSU (28-6) is heading to the Sweet 16 for first time since reaching the Final Four in 2006. The Tigers will face the winner of the Michigan State-Minnesota game. Those teams are playing Saturday night. Maryland finishes 23-11.

LSU is handling Maryland in the post and on the scoreboard.

Naz Reid has 8 points, all of them in the paint, and the Tigers lead the Terrapins 38-29 at halftime on Saturday.

No. 3 seed LSU has doubled up sixth-seeded Maryland in the paint, 20-10. The Tigers also played exceptional defense, holding Maryland to 28.6 percent from the field and forcing six turnovers.

Maryland trailed by as many 15 midway through the half, but got it under double digits thanks to two late 3-pointers by Aaron Wiggins. Wiggins hit one with 1:01 remaining and another with four ticks left.

Time to see whether the upstarts of the NCAA Tournament can dance their way to the Sweet 16.

Seventh seeded Wofford of the Southern Conference plays No. 2 seed Kentucky on Saturday in a game that will test how the team outside the Power Five is set up for a deep run.

The Terriers have won 21 straight games and haven't lost since Dec. 19. They were ranked in the AP Top 25 for much of the season. Kentucky is favored by 5 but is playing without leading scorer and rebounder PJ Washington because of a foot sprain.

No. 12 seed Murray State also plays Florida State in the West, riding high behind Ja Morant and his virtuoso performance with 17 points, 16 assists and 11 rebounds in a rout of fifth-seeded Marquette in the first round.

The Big Ten leads the tournament among conferences with seven teams still in and a 7-1 record.

It's even set up for a less than ideal second-round matchup between No. 2 seed Michigan State and 10th-seeded Minnesota.

Here's a quick look at the rest of the conference records going into Round 2 among those that have teams remaining, including the first four play-in games: