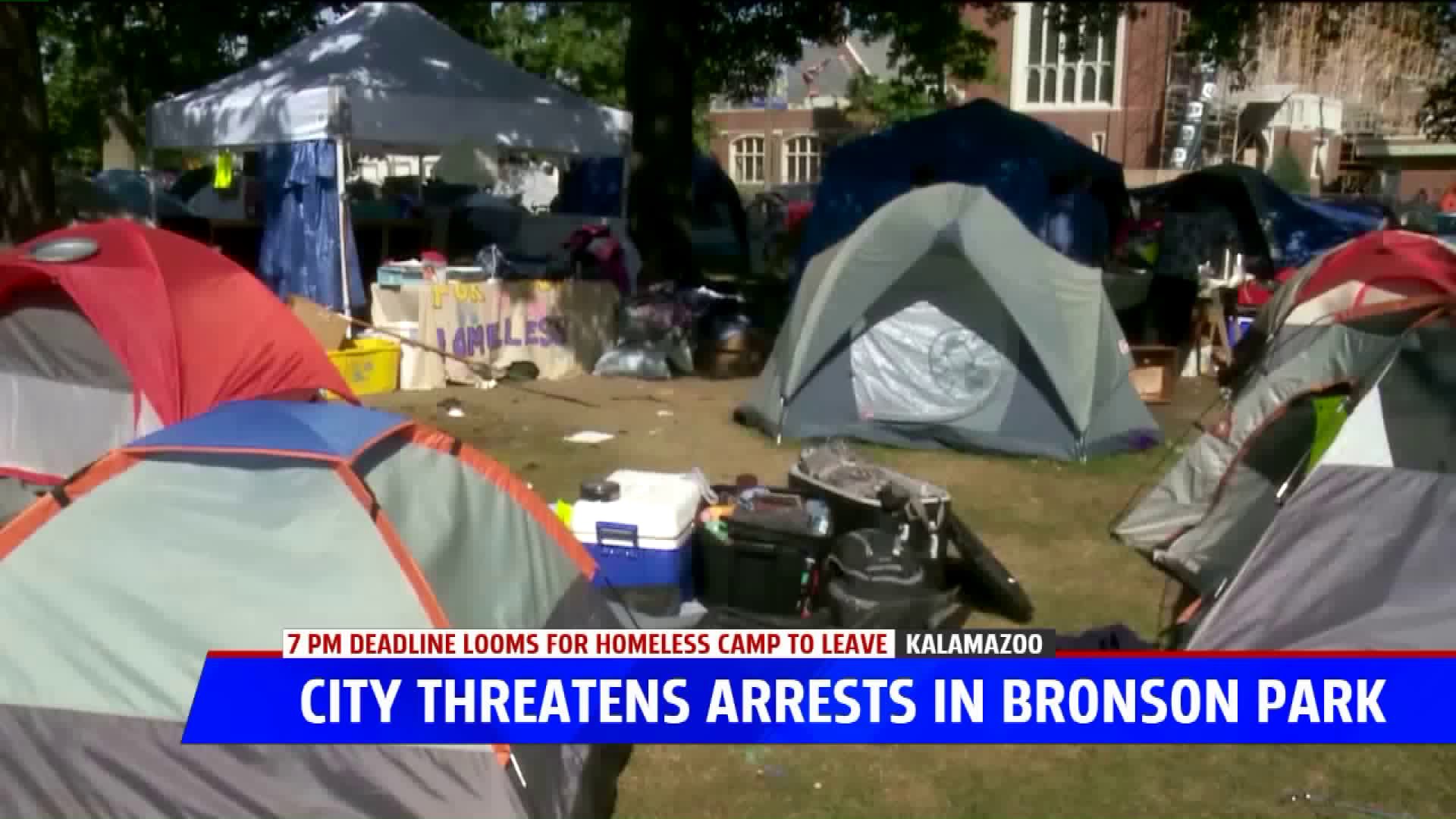 KALAMAZOO, Mich. — Protesters at Bronson Park said they woke up this morning to a lime green notice on their tents placed there by public safety officers. It was a Notice of Violation from the City of Kalamazoo stating that they had to leave by 7 p.m. Tuesday night.

“You may try to silence us by moving us out of the park, but  we’re not going nowhere,” said Michael Rizor, a protestor and representative of the Bronson Park Freedom Encampment group. “We’re not going to go back into the shadows. We’re not.”

The notice continues to state that the group is in violation of the City Ordinance 33-24, which prohibits “camping and the placements of tents in the park.” It says that they’ve been ordered to stop and leave or face arrest and prosecution.

“We’re just going to get arrested,” said Carl Wiseman, another representative of the group. “We’re going to stand our ground and basically let them violate our constitutional rights.”

The group released a statement Tuesday afternoon stating that they’re preparing for arrests. Deputy City Manager Jeff Chamberlain said the city doesn't want arrests but would like to have Bronson Park cleared.

“They have been there illegally for a number of weeks,” Chamberlain said in an interview at City Hall.  “We’ve been having good dialog with the protesters, but at the same time the camp almost doubled in size here in the last week.”

A handful of protesters, many of whom are homeless, began occupying Bronson Park in late August, pitching tents on the steps at City Hall in protest of a proposal to ban sleeping overnight in Bronson Park. Then, after meeting with the city officials, they agreed to move to a Cedar Street location. However, days later they returned to Bronson Park because of what they called “inhumane” conditions. Since then the group has grown to over 100 tents and even more protesters.

“There’s health, there’s sanitary conditions that we’re concerned about,” Chamberlain said. “But the big issue is that this is illegal. And we’ve been telling the folks at the park all along that eventually this needs to come to an end.”

Protesters said that they have already asked many of the women and children in the camp to leave should things take a turn for the worse when the police arrive at 7 p.m.

"According to the violation slip that we received this morning, it also means personal belongings, which means that the city is trying to criminalize the homeless, even though that's why we started this protest in the beginning," Rizor said.

Rizor was among the group of protesters, city officials and community organizers who met September 14 at a conference room at Ministry with Community on Edwards Street. They formed four work groups to tackle the specific physical and mental health issues that homeless men and women face on a daily basis. The city said those groups are still intact.

"We also want to keep working with the folks on some of these very valid issues that they have about homelessness," Chamberlain said. "So we have pulled together a team of housing providers -- The Gospel Mission, Ministry with Community, and others -- [who] are really working very hard to get people housing, get them into the system where they can have access to state funds."

As for now, city officials would like them out of Bronson park. The protesters said they're determined to stay.

"I think its our job to change society's way of thinking," Wiseman said. "Because somebody being judged by their bank account value above their human character, integrity and moral values is, I think, an insult to every single one of our founding fathers."