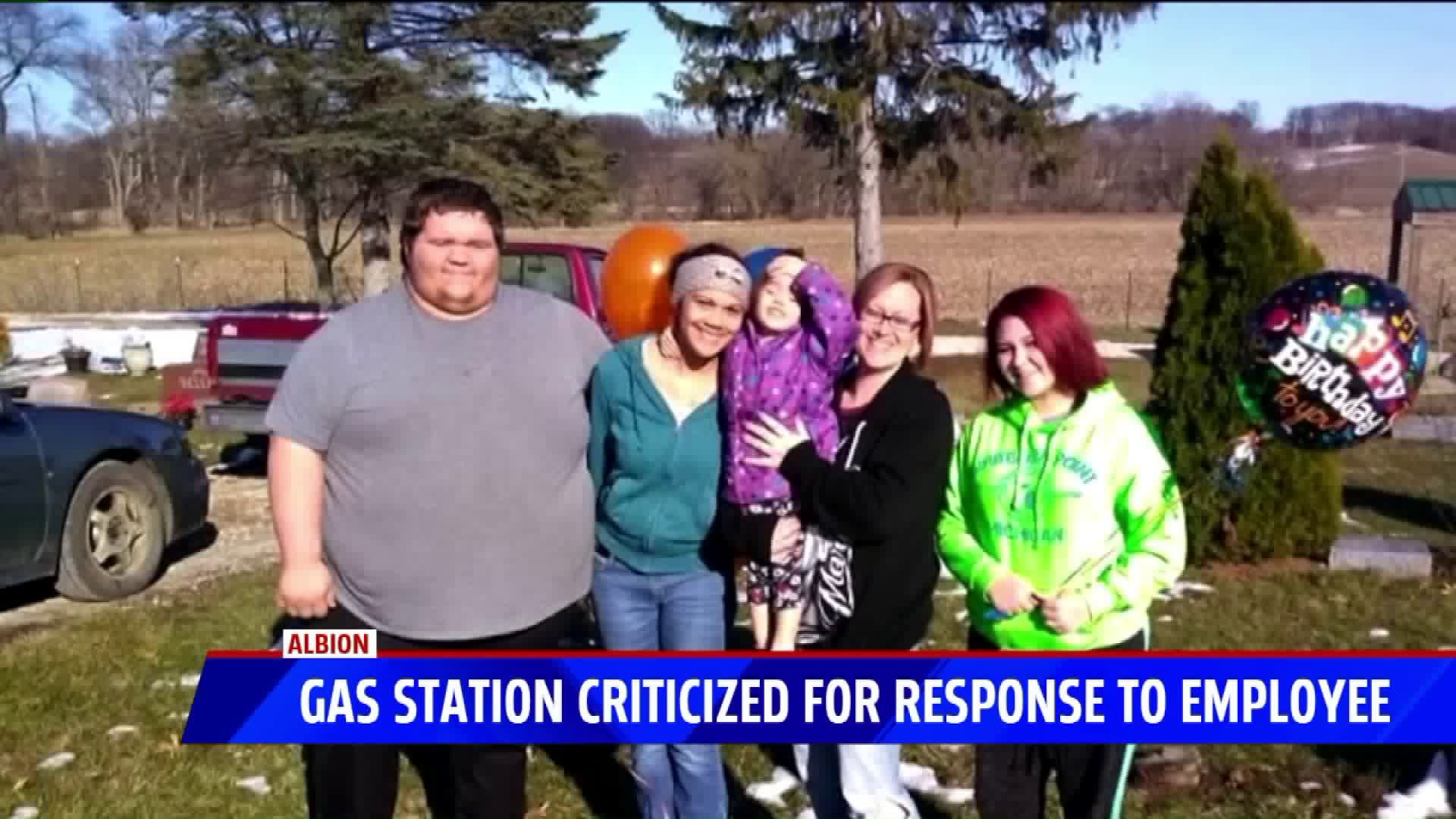 ALBION, Mich. — Crystal Fisher always thought that burying her husband back in 2015 was the hardest thing she’s ever done, she said. However seeing her son on life support in the hospital was the absolute worst for her.

“It's hard, it’s hard,” she said with her voice shaking. “I have people in my inbox telling me how strong I am and I’m trying so hard.”

Thursday morning, Crystal rushed him to Oaklawn Hospital in Marshall, she said. He had a fever of 104 and his oxygen was low. Crystal herself started having panic attacks. So her daughter called her boss at P.S. Food Mart to let her know what was going on.

“She said ‘can you have somebody cover mom for [Friday], my brother’s really sick, they’re going to have to ventilate him,’” Crystal recalled her daughter saying to her boss over the phone. “And the boss, I could hear her over the phone and she told my daughter ‘this ain’t the way we run things, you’re mother needs to be the one calling me.’”

Crystal was shocked, she said, but continued to focus on her son. Later that day, within hours of being at Oaklawn, the doctor said Jason needed additional help because his fever wasn’t breaking fast enough.

“He came in and told me that they were going to have to tube him and transport him to [University of Michigan],” she said. “I lost it. That’s my kid.”

When Crystal arrived to Ann Arbor and tried to her see her son she wasn’t allowed to she said. She remembered seeing doctors everywhere and panicked even more.

“Then a doctor finally came out and took me into a private room and said that they had to ventilate my son, that he is on life support,” Crystal said. “All they knew is he had an infection somewhere.”

The doctors didn’t know what type of bacterial infection it was or where it was coming from, she said. Nonetheless they kept him on ventilator. Saturday, Crystal reached out to her boss again.

“I text her Saturday and said 'hey just letting you know that I’m not going to be able to come to work until further notice at least until he’s off life support,'” Crystal said. “She automatically came back with oh so you’re letting me know you’re quitting.”

Crystal was shocked. She replied by saying ‘no, so you’re telling me I’m fired?’ Her boss respond ‘this ain’t the way we run things.’ Furious, Crystal posted the exchange on Facebook and within a day it had been shared 25,000 times.

“My 14-year-old she was like ‘mom, mom so many shares.’ And I’m like I did not expect it to take off like this,” Crystal said. “But when I have people in my inbox ‘hey I’m from Australia praying for you, you know, I’m just, I’m overwhelmed.”

One of the thousands of people to see her story was the Folk Oil corporate offices. They contacted her and told her to take as much time as she needed. They also fired her boss. Crystal was grateful. She can now focus solely on her son.

“My concern is when my son does wake up and when he does open his eyes, he sees mommy there,” Crystal said.