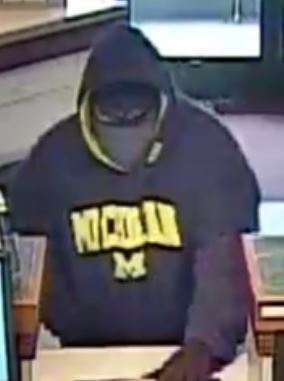 HOLLAND, Mich. — Authorities in Holland are offering a $1,000 reward for information in two robberies that happened at the same bank.

Police said Tuesday that the same suspect is believed to be connected to the Feb. 14 and April 6 robberies at Macatawa Bank, 701 Maple Ave.

Police say that the suspect was armed with a handgun during both robberies and pointed the gun at tellers during the most recent incident.

The suspect is described by police as a man in his 20s or 30s between 5 feet 4 inches and 5 feet 8 inches tall and approximately 200 pounds.

He was wearing a blue hooded Michigan sweatshirt with yellow on the inside of the hood, a dark hat, black gloves, a red t-shirt and blue jeans at the time of the April 6 robbery. He also had a black scarf covering his face, police said.

Police on Tuesday released surveillance images of the April 6 robbery.  An image from the Feb. 14 robbery had previously been released.

A $1,000 reward is being offered for information that leads to the arrest and conviction of the suspect.  Anyone with information on the robberies is asked to call Holland Department of Public Safety at 616-355-1150 or Silent Observer at 877-887-4536.