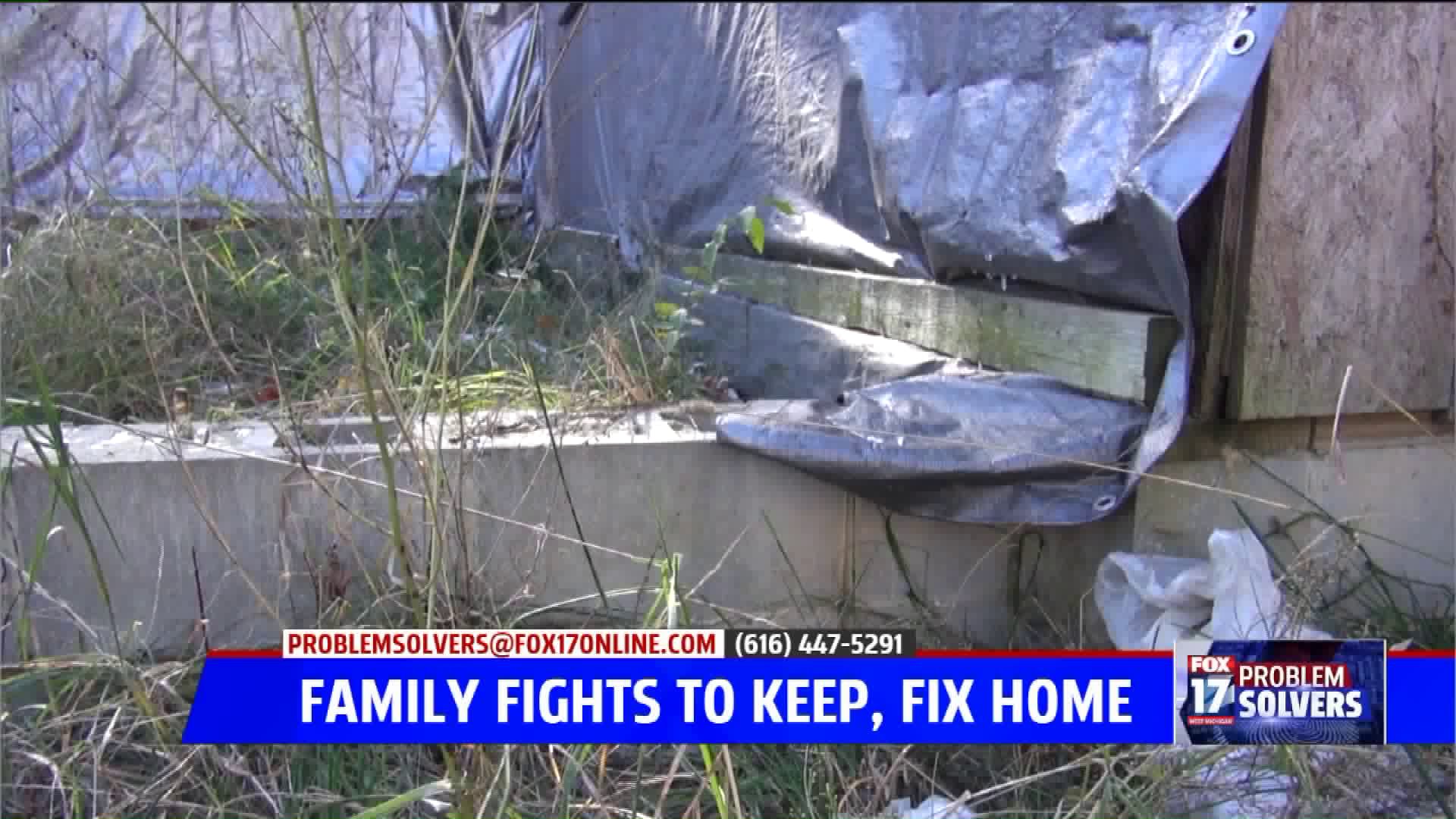 ALTO, Mich. -- The Budrew family first shared their housing struggle last March and sat down again with us in late 2017. Right now, they're living through another winter with a home in disrepair. The Budrews said they also have the added stress of foreclosure and started a Gofundme page for help.

"It'll be four years in February that this has been going on," Seth Budrew said.

He, his wife Haley, and four children are one month shy of the four year anniversary of a snowstorm that's impacted the family to this day. So much snow fell it damaged their property, and they said that began their battle with their homeowners insurance for damage repair payment.

The Budrews said they feel Frankenmuth Insurance has treated them unfairly and that the battle continues.

"This whole thing has been they don't agree with the cost. They fought with the scope of work. None of this has even been about if we were covered by the claim. The claim is covered. They just don't want to part with the money," Budrew said.

The Budrew's took the company to court. Both parties agreed that as of August 2016, the Budrew's contractor estimated $167,000 in repair costs.

Frankenmuth said its own estimate was $106,000. A neutral, third party 'umpire' recommended $125,000 for repair costs, according to Frankenmuth.

The company said it would have paid the recommended amount if the Budrews had made repairs up to that point with money the company had already distributed. Frankenmuth said it has paid out nearly $163,000, including other costs such as temporary housing.

​However, the family said a preferred contractor through Frankenmuth caused damage to the foundation during the initial repairs.

"Thankfully, the foundation was one of the things that we did get fixed with the money, even though the insurance company never included that in all the estimates," Budrew said.

The Budrews are fighting to get out of foreclosure as of May 2017. They said it was brought on after their insurance premiums spiked because of the condition of the home, and they couldn't keep up with payments. They're financially strapped.

"This is a long time to be living under this kind of stress," Budrew said.

The Budrews said they need at least $65,000 to redeem their home. The family said any extra money raised through the Gofundme will go to help the people of Puerto Rico rebuild.

Frankenmuth declined an interview with FOX 17 citing another lawsuit filed by the Budrews. They also said settlement talks are underway. However, the company issued the following statement in late November.

"Helping families and business owners quickly recover and rebuild after an unexpected loss or damage is the heart of Frankenmuth Insurance. We pride ourselves on fast, fair claims service. That dedication is apparent in our claims satisfaction rate—96 percent of policyholders say they are pleased with our handling of their claims.

There are rare cases, like the Budrew’s, when a policyholder is dissatisfied with the claim process.

Mr. Budrew filed a claim in February 2014 after excessive snow accumulation damaged the roof of his garage. We worked in good faith to provide the funds necessary to fix the damages and provide temporary housing for the family. Frankenmuth promptly affirmed coverage and began making payments toward the claim 12 days after it was filed. By Sept. 30, 2014, we had made initial payments of $83,285 to begin repairs, replace personal property and provide temporary housing.

Since that time, Frankenmuth Insurance has made settlement offers, participated in mediation and gone through appraisal. Frankenmuth has paid a total of $162,785.

Despite the payments, Mr. Budrew has not elected to make repairs and continues to litigate.

In fact, Mr. Budrew filed a new lawsuit this month, on the same day the judge from his first lawsuit denied his renewed motion for trial on remaining damage issues.

While we respect Mr. Budrew’s right to dispute his claim, we have an obligation to serve all of our policyholders. They count on us to be financially sound so we will be there for them in their time of need. We take that duty both seriously and compassionately. That means paying fairly, and we have done that for the Budrews."