Police still searching for ID of remains found in 1994

ALCONA COUNTY, Mich. – Michigan State Police and the Alcona County Sheriff are asking for help again in identifying the body of a woman found in northern Michigan 23 years ago.

Investigators say the skeletal remains of the woman were found in October 1994 by a bow hunter.  The remains were found in a wooded area off Bamfield Road, between Curtisville and the Alcona Dam.

Investigators say that DNA technology has advanced since the finding of the remains and that scientists at the University of North Texas Health Science Center for Human Identification collected a DNA sample from the remains.  The DNA profile has been uploaded to the Combined DNA Index System (CODIS) database and a case profile has been posted on the National Missing and Unidentified Persons System database.

Michigan State University anthropologists say that the woman was between 30 and 50 years old and between 4’7″ and 5’6″ tall.  She was likely Caucasian, but could be of any population group.  They say there is evidence of a fracture to the woman’s skull and that there may have been some kind of trauma at or around the time of her death.  The remains were likely in place for up to four years before they were discovered in 1994.

Forensics artists from the Michigan State Police, the FBI and from Louisiana State University’s Missing Persons Molecular and Medical Genetics Department have made renderings and sketches of what the woman may have looked like. 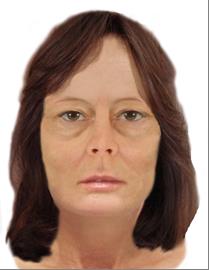