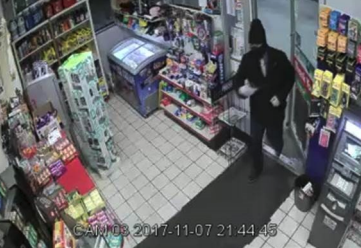 GRAND RAPIDS, Mich. —  Investigators believe at least four recent armed robberies in Grand Rapids, Wyoming and Kentwood may have been committed by the same suspect.

The Grand Rapids Police released surveillance photos of the suspect late Wednesday afternoon. They say the robbery spree ran from early- to mid-November at businesses open to the public between 6:30 p.m. and 10 p.m.

The Grand Rapids Police Major Case Team is working with area agencies on possible connections to several robberies during that time span.

Investigators say the suspect is a black man who is 5 feet 8 inches to 6 feet tall, weighing between 160-175 pounds. They say he was wearing gloves, a ski mask – and in several of the thefts – a black peacoat.

In all of the robberies, the suspect arrived and left on foot, and held a black handgun, according to police.