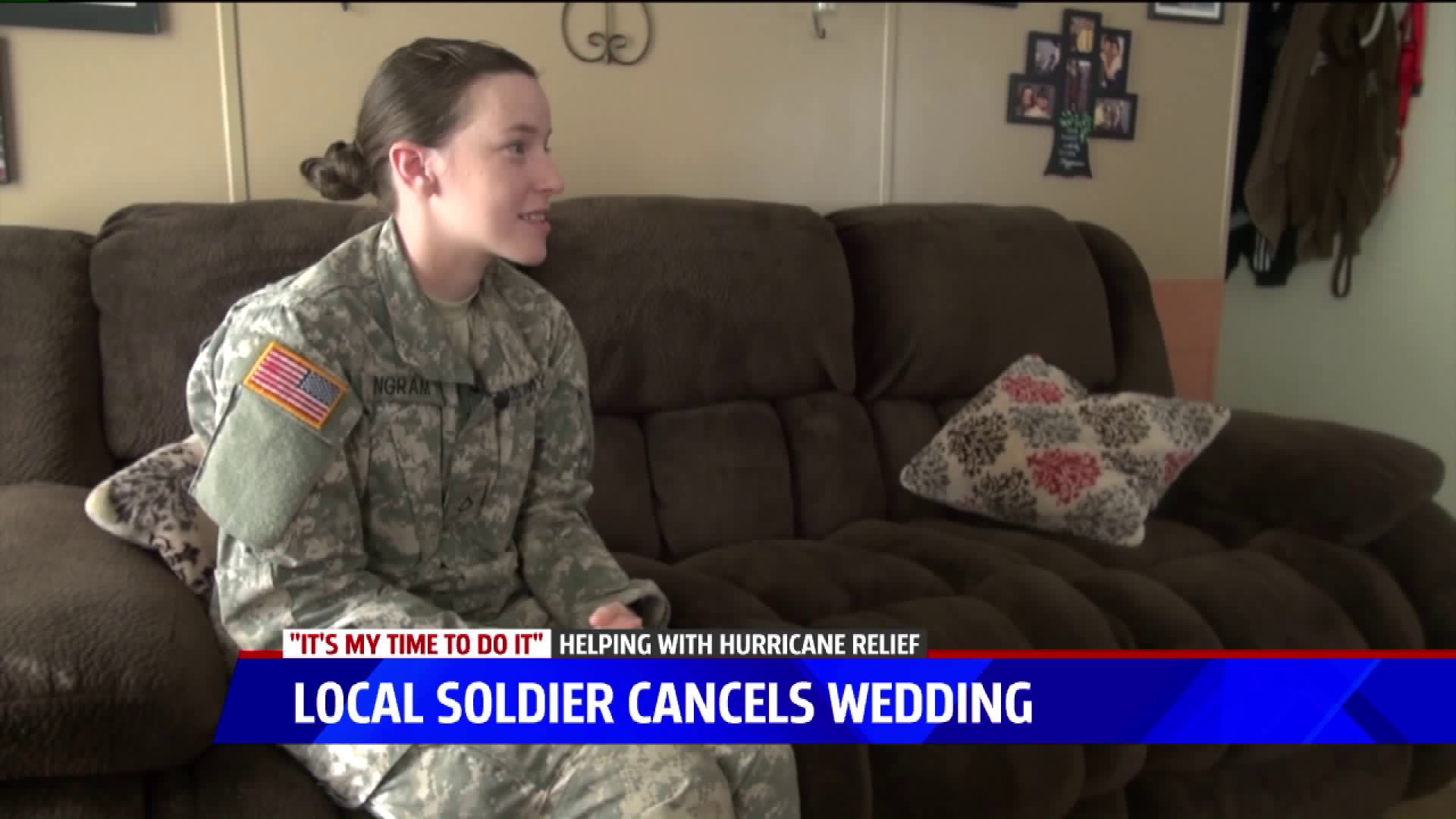 WEST MICHIGAN -- As people continue to deal with the aftermath of Hurricanes Irma and Harvey, soldiers from the Michigan National Guard prepare to travel south to provide relief. The natural disasters are impacting lives outside of the southern region. That includes wedding plans.

"Everyone wants to have their dream wedding and plan it all out and everything go smoothly. No one expects 10 days before you get married to have to cancel," Elainnie Ingram said.

But Ingram is taking it like a soldier. That's because she is. She's serving in the National Guard. It's a family tradition.The private first class' fiance popped the big question, asking her hand in marriage, in April of last year.

Ingram said, "As an excited bride, you start planning right away."

From the dress, to the venue, to the invitations and of course, setting the date, Ingram said everything had just about come together. But being part of the Michigan National Guard, she said she's always aware of the fact she could get called to duty at a moment's notice. When Hurricane Harvey hit, she said that possibility became probable.

"Everyone wants to be a part of that. As a National Guard, you want to be a part of the helping [with] the hurricane or floods or disasters. That's kind of what you signed up for. So when Hurricane Harvey hit, our unit got kind of jealous that we didn't get to go down there. We weren't the first pick," Ingram explained.

But when Irma came on the radar, Ingram said it felt like only a matter of time. Just 10 days before her big day, she got notice she'd be deploying on her wedding weekend.

"I didn't even think about asking sergeant if I didn't have to go or how I could get out of it. It was just natural for me just to think of what do I need to do on my end to be a part of this," she said.

Sherri Ingram, Elainnie's mother joked that her daughter would have to name her baby 'Irma' if she has a girl.

She said she initially thought her daughter was joking about having to deploy. But when reality and disappointment set in, Sherri Ingram began calling vendors to cancel. She said all of them were very understanding and thankful for her daughter's service.

"We're fortunate. We're not losing as much as what the people in Florida, and Texas, and out west are losing," she said.

She added, "Right now, our main focus is supporting her [and] supporting our troops."

Elainnie Ingram said, "With National Guard, I signed up for this 6 years ago. So it's my time to do it, and it just so happened to be the wedding weekend but you can plan another wedding."

Ingram said the base in Battle Creek has offered to allow her to use the chapel there on Saturday, the day before she deploys. Also, the couple thought about going to court to tie the knot there on the spot. But right now, Ingram said she's weighing all of her options and again, considering just waiting until she gets back. Booking a venue is still part of the concern.