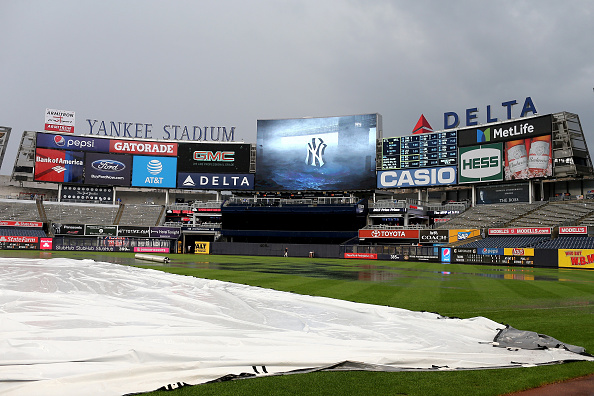 NEW YORK (AP) — Jordan Zimmermann pitched his first scoreless outing for Detroit in 1 1/2 seasons, Justin Upton hit an early RBI double on the 10th anniversary of his major league debut, and the Tigers beat the New York Yankees 2-0 in a soggy Wednesday matinee that included 4 hours, 37 minutes of rain delays and ended well after dark.

Zimmermann (7-8) did not allow run in his first three outings with the Tigers after signing a $110 million, five-year contract, starting with 24 1/3 scoreless innings last year. He had not pitched shutout ball in 35 outings since.

He allowed six hits over seven innings, walked none and struck out six, including three in a row looking in fourth.

Scheduled for 1:05 p.m., the game started 1 hour, 26 minutes late on a warm, humid afternoon. Rain resumed in the seventh and a downpour that caused flash flood warnings halted play at the start of the eighth, just after a loud thunder crack.

There were pond-like areas of water when the grounds crew began the cleanup, which took more than about two hours. Only a few hundred fans from the original crowd of 43,379 remained when play resumed after a 3:11 wait.

Dellin Betances came in for the Yankees and struck out the side on nine pitches.

Bruce Rondon pitched the bottom of the eighth, and Shane Greene pitched a perfect ninth for his second save in two nights since taking over as the Tigers’ closer following the trade of Justin Wilson to the Chicago Cubs. New York was shut out for just the second time this season.

Masahiro Tanaka (8-10) dropped to 0-6 in day games this year but pitched well. He allowed a run and three hits in his first five pitches, then gave up only an unearned run over the next five innings. Tanaka allowed up six hits and struck out six, lowering his afternoon ERA from 14.81 to 12.15.

Detroit went ahead after five pitches when Ian Kinsler and Jim Adduci singled, and Upton grounded a double past third baseman Todd Frazier and down the left-field line.

Tanaka walked Mikie Mahtook with two outs in the fourth, and James McCann singled to center. Jacoby Ellsbury allowed the ball to kick off the heel of his glove, then dropped it as he tried to pick it up, and Mahtook went home on the error.

New York went 0 for 9 with runners in scoring position, dropping to 1 for 18 as it lost the final two games of the three-game series and fell from the AL East lead.

Aaron Judge singled leading off the sixth and Gary Sanchez doubled on the next pitch. But Didi Gregorius and Matt Holliday popped out, and Chase Headley struck out with a full count.

Ellsbury reach on a single starting the eighth and advanced on Rondon’s wild pitch, but Judge struck out, Sanchez grounded out and Gregorius struck out.

Upset after a 2-1 pitch was called a strike, Headley spoke with plate umpire Dan Bellino at the inning’s end. Yankees manager Joe Girardi then spoke with Bellino.