Two men accused of kidnapping in custody, child is safe 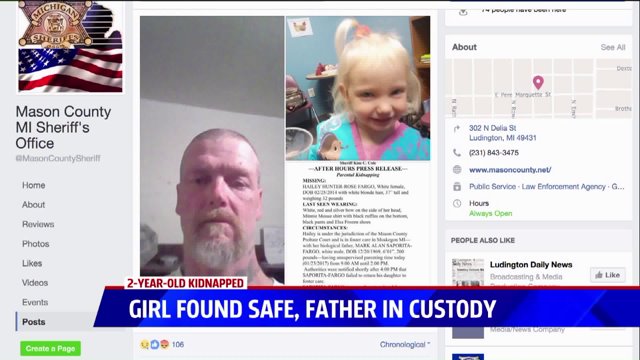 LUDINGTON, Mich. - The Mason County Sheriff says the 2-year-old who was allegedly taken by her father and never returned after an unsupervised foster care visit is safe. The toddler's father, and the man who is believed to have helped him, are both in custody.

Mason County Sheriff Kim Cole confirmed that Mark Alan Saporita-Fargo, 47, is in custody, and his 2-year old daughter Hailey is safe. Jeffrey Miller, whose black Ford Taurus was driven to flee with the toddler, was arrested around 1 p.m. in Hillsdale County, several hours after Fargo was arrested nearby.

Saporita-Fargo allegedly went to a foster care home in Muskegon Monday for “unsupervised parenting time” with his daughter, according to police.  He took the child as part of the visit scheduled from 9 a.m. until 2 p.m. but never returned. FOX 17 spoke with a friend of the girl's foster mother who says she is "very relieved" Hailey is coming home.

Officials say they were notified after 4 p.m. Monday that Saporita-Fargo did not return Hailey to foster care. He is currently out on $25,000 bail for criminal sexual conduct charges and was scheduled for a jury trial on Tuesday.

Both Saporita-Fargo and Miller are expected to be charged with conspiracy to commit unlawful imprisonment, a 15-year-felony, in Mason County.

Why no Amber Alert was issued

MSP Det. Sgt. Sarah Krebs told FOX 17 this incident did not meet their Amber Alert criteria: because Saporita-Fargo had court-granted parenting time, he did not technically abduct his daughter; rather he was overdue in returning her to her foster home.

This was the fourth state-issued Endangered Missing Advisory since Jan. 1, and each Krebs says have been successful.

Why did a father have unsupervised foster care visits, yet have serious charges against him?

FOX 17 reached out to Bethany Christian Services for comment as well as the Michigan Department of Health and Human Services which oversees statewide foster care.

"Depending on individual circumstances, parents who have children in foster care may or may not be allowed unsupervised visitation. Decisions about visitation are guided by Michigan Department of Health and Human Services policy and based on several factors, including the needs of the child, a safety assessment, parental capacity, the plan for finding the child a permanent home through either reunification or adoption, and assessments of parental progress. All parties in the case – including the parent’s attorney, the child’s attorney and the department – provide recommendations to the court and the court issues an order setting forth the terms of visitation."

A spokesperson with Bethany Christian Services then released this statement to FOX 17:

"The safety and well-being of children and families is Bethany Christian Services’ primary concern. Due to privacy laws, we are not at liberty to address any questions on this matter."