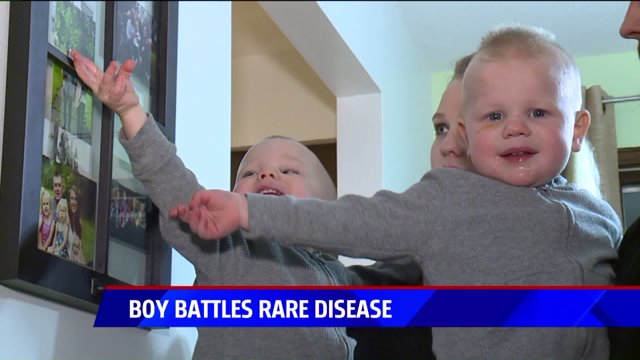 COOPERSVILLE, Mich. -- A West Michigan toddler born with a rare genetic disease is now living a healthy life thanks to a specialized treatment. Levi Looks was born with severe combined immune deficiency (SCID), commonly known as "bubble boy disease", meaning he had no immune system.

Levi and his twin brother Colton turn two next month. When they were born, Colton was healthy, but Levi was not.

"I knew nothing about it," said Kala Looks, the boys' mom. "I had no idea what it was, so when they said something was wrong with his screening it was terrifying."

A routine newborn screening showed Levi had SCID, meaning his blood had no T-cells, leaving him essentially no immune system, either.

"It instantly changed everything because we had to be confined to our home and not be by anybody else besides immediate family," said Looks.

"SCID makes you so immuno-compromised that you can die from the common cold," said Dr. Sung-Yun Pai, Levi's doctor from the Dana-Farber/Boston Children's Cancer and Blood Disorders Center.

Treatment meant a bone marrow transplant, but they couldn't find an exact match. Levi and his family traveled to Boston where they learned about a gene therapy trial.

"The idea behind gene therapy is you can harvest the bone marrow of the patient and then do gene therapy in the lab to correct those cells and make them into cells that can function normally and make T-cells and then give those cells back as a transplant," said Dr. Pai. "It's sort of doing a transplant from themselves, and this avoids graft versus host disease because they are completely matched to themselves. We used a specially designed virus that has been engineered to infect bone marrow cells and insert a normal copy of the gene that's broken in Levi into those cells."

Kala admits she was scared.

"I just have never heard of it before and I didn't know much detail about it" said Looks. "It seemed kind of weird modifying his genes and putting them back into him. It just seemed almost too simple really."

"We could see that the T-cell numbers were present and growing and we could also see evidence that the gene we had added into the cells was present in the T-cells," said Dr. Pai. "He is practically normal because he was missing T-cells and now he has T-cell numbers that are very similar to other children his age."

"We were very excited," said Looks. "They're happy with all of his lab results and all the testing they did so we're very excited. It means he gets to be a normal kid."

Levi is only one of a handful of children who have successfully been treated with gene therapy. Dr. Pai admits it's still very new to them, so there's no way of knowing if it'll sustain Levi for the rest of his life. Levi has to get intravenous immunoglobulin infusions every four weeks and will most likely always have to do it, but doctors are thrilled with his progress so far.

Patients treated with gene therapy in the 1990's are still living healthy lives.