Ohio State holds on for 17-16 win over Michigan State 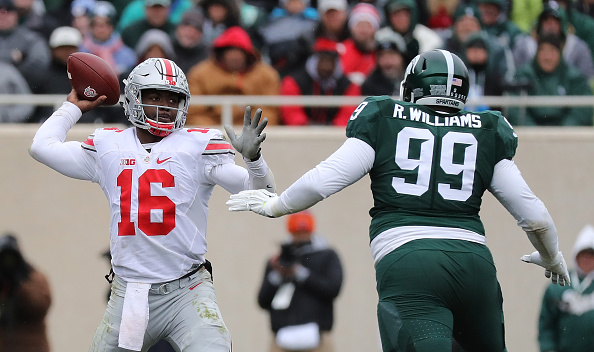 EAST LANSING, Mich. (AP) — Mike Weber ran for 111 yards and a touchdown, and No. 2 Ohio State held off Michigan State 17-16 on Saturday after the upset-minded Spartans missed a 2-point conversion with 4:41 remaining.

Ohio State (10-1, 7-1 Big Ten, No. 2 CFP) can now move on to next weekend’s showdown with rival Michigan, but only after withstanding a spirited challenge from a Michigan State team that derailed the Buckeyes’ national title bids in two of the previous three seasons. The Spartans (3-8, 1-7) were down 17-10 when LJ Scott scored on a 1-yard run with 4:41 to play. Michigan State went for the lead, but Tyler O’Connor’s pass on the 2-point conversion attempt was intercepted in the end zone.

The Spartans got the ball back one more time, at their own 20 with 2:04 remaining. Tyquan Lewis sacked O’Connor on the first play, and then Gareon Conley intercepted him on the second.

Scott ran for 160 yards and also scored on a 64-yard catch-and-run in the first minute of the game, but the Ohio State defense didn’t allow much more after that. J.T. Barrett threw a 24-yard touchdown pass to Curtis Samuel in the first quarter, and the game was tied at 10 at halftime.

Weber’s 4-yard TD run in the third gave the Buckeyes the lead for good.