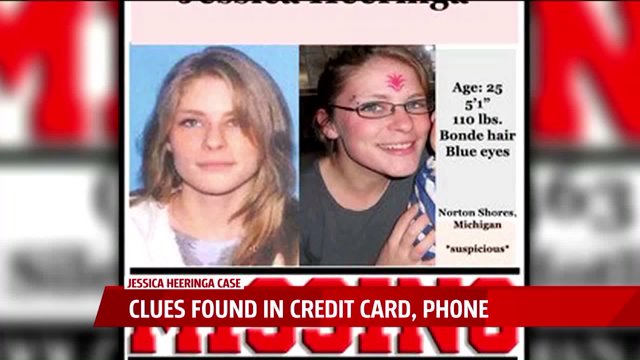 MUSKEGON COUNTY, Mich. — Charges against Jeffrey Willis for the murder and kidnapping of Jessica Heeringa stem from credit card and phone records and accounts from Willis’ own cousin who said he helped bury Heeringa’s body in a hole that had already been dug by Willis.

Willis was charged with open murder and kidnapping in connection to the case on Tuesday. His cousin, Kevin Bluhm, was charged as an accessory after the fact.

Details in a 16-page affidavit obtained by FOX 17 reveal new information showing investigators relied, in large part, on the cell phone and credit card records of Willis to contradict his previous statements given to police about where he was the night Heeringa vanished. Police also say they found pieces of a gun at the scene where Heeringa disappeared that matched the gun later found in Willis’ minivan.

Heeringa vanished the night of April 26, 2013 while working the overnight shift at the Exxon gas station in Norton Shores. Police say they found pieces of a Walther P22 gun at the gas station. Those pieces were missing from the gun they later discovered in Willis’ van, according to the affidavit, a gun that had been stolen from Willis' co-worker.

Phone records show Willis was at the gas station hours before Heeringa disappeared, around 5 p.m., and that he’d been at a “magic tournament” at the mall next door, according to the court document.

A witness recounted to police she remembered seeing Willis at the gas station speaking to Heeringa the day before her abduction too.

Bluhm told detectives he knew Willis had been following Heeringa, while credit card statements support that,  showing Willis had frequented the Norton Shores station as many as 15 or 16 times, according to the affidavit.

Willis claimed to investigators he’d been at his home between 9:30 p.m. and 12:35 a.m. the night Heeringa disappeared. But cell phone records indicate Willis was instead near his late grandfather's empty home during that time period.

Court documents indicate that Bluhm told investigators he knew Willis had hit Heeringa over the head at the gas station to knock her unconscious before putting her in his minivan.

The day after Heeringa disappeared

Home of Willis' late grandfather searched in May. (Josh Sidorowicz)

The day after Heeringa’s disappeared, Bluhm said Willis asked him to come to a house on Baily Street in Norton Shores that had formerly been owned by Willis’ grandfather before he passed away. Bluhm said he was told “there would be some women there and they were going to kind of party,” the documents stated.

According to documents previously obtained by FOX 17, Bluhm told investigators he saw Heeringa’s body in the basement. The home was searched by investigators in May following Willis' arrest, and again in September. Police have yet to reveal if evidence was ever found inside.

The new court affidavit obtained Wednesday reveals Bluhm told investigators he saw Willis standing next to the unclothed body of a woman, who he presumed to be Heeringa, who was laying face-down in the basement. Her hands were tied, her head was injured.

The lights in the basement were dim. Heeringa wasn’t moving, Bluhm told police, leading him to believe she was dead.

Willis told Bluhm he’d tortured and had sex with Heeringa, the document states.

A hole had already been dug

Bluhm said he helped “get rid of the body,” by assisting Willis in wrapping Heeringa in a sheet like “a taco,” according to the affidavit.

Willis carried Heeringa’s body up the stairs of the Bailey Street home and placed her into the back of his silver minivan parked in the driveway.

Bluhm told detectives he followed behind Willis and parked his vehicle at a nearby drywall supply store. Bluhm then said he and Willis drove Heeringa's body to an area off Sheridan, north of Laketon Road. The two walked her body to an area near the old rail road tracks where a hole had already been dug and shovels were at the ready, Bluhm told investigators.

Police searched the same area earlier in the summer, but found nothing.

Muskegon County Prosecutor D.J. Hilson said on Tuesday he believed Heeringa died within 24 to 48 hours of her abduction. But detectives have yet to find her body.

Before Tuesday, Bluhm had appeared on police radar months prior due to inconsistencies in stories he’d provided to investigators. The conflicting tales led to obstruction charges. Tuesday, he was sentenced on those charges to time served for lying to cops.

In June, Bluhm told police Willis “did do it,” when asked about the abduction of Heeringa. He also told investigators he helped Willis “take care of” the body, only to later recant both stories, claiming they were lies.

Bluhm was also charged for lying to police during the course of the investigation into the 2014 murder of Rebekah Bletsch.