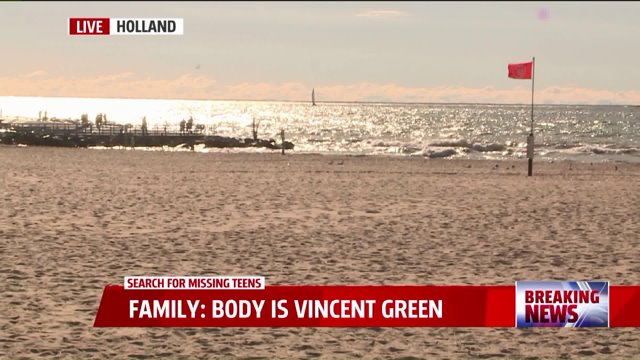 HOLLAND, Mich. -- The body of one of the two teen boys who went missing in Lake Michigan near Holland State Park was recovered Thursday.

Family ID'ed Vincent Green, 14, recovered. Search called off for waves until 7a tomorrow MSP sonar may be used tonight @FOX17

Green and Chris Mimis, 17, were last seen by the north pier Wednesday evening.  Four boys were swimming within the swim zone when Mimis and Green disappeared.

Mimis' family traveled to the area from Chicago as the search continues.  He has a 4-month-old daughter and has been working two jobs to provide for his family.  The family has set up a GoFundMe account for Mimis.

Green was entering his freshman year at West Ottawa High School and was going to be playing basketball.

The Ottawa County Sheriff's office say that visibility in the water is near zero and the currents are still strong.  Beach Advisories had been posted since early Wednesday through Thursday night.  Red flags were flying at the beach to warn of high waves and strong currents.

Officials say they called off the search Thursday before 6 p.m. because of worsening conditions including growing waves. State Police will deploy their automated sonar overnight if possible, otherwise the search for Mimis will resume Friday morning at 7 a.m.

This is a developing story.  We'll update it as more information becomes available.