Boy bullied for rare condition is getting his smile back 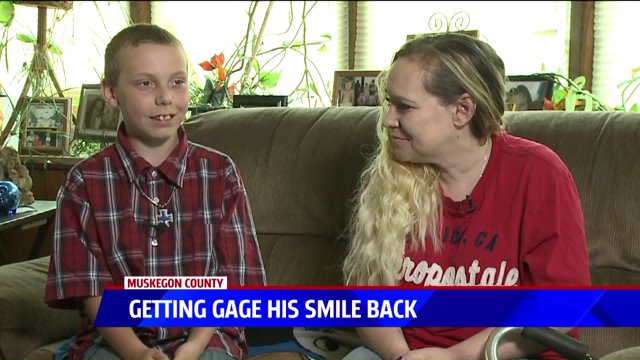 MUSKEGON, Mich. - A seventh grader in Muskegon who has a rare oral condition will get his dental work and braces thanks to community support.

Additionally, thanks to many donors, the family has funds to get Knapp braces. Any extra money they said will go toward any complications or fixing their trailer's leaky roof or electrical issues.

“I’m really happy about it, that people had the heart to do this kind of stuff," Knapp said to FOX 17 Thursday.

Knapp smiled ear to ear explaining what these donations mean to him and his family.

“It’s like holy cow, people care," said Angie Johnson, Gage's mother. "They connected with him. When Gage found out he teared up, he cried, he was very overwhelmed.”

When he thinks back to the bullies last year in school, who picked on him for his teeth, Knapp smiled and said, "I think that it would make the bullying go down because they know that we’re talking about them. The people that used to bully me, they’re probably, ‘whoa, he’s on TV.’”

Knapp said thank you again to everyone who helped his family afford his dental work. He still offers his support to anyone who has been picked on.

“Thank you to all the people who helped and raised money for us," said Knapp. "Keep your head up high if you’ve been bullied before: just don’t let it drag you down.”