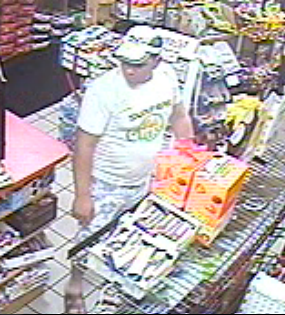 GRAND RAPIDS, Mich. — Grand Rapids Police on Thursday released photos of a man who is wanted in connection with gas pump skimming.

The man is one of two suspects believed to be involved in the June 11 incident at the Marathon gas station, 2171 Plainfield Ave. NE.   Police said in a release that one of the suspects went inside the gas station to purchase something while the other “appeared to tamper with the pump.”

A skimming device was later found on the pump, according to a release.

The vehicle the suspects were in on the night of the alleged skimming incident is described as a gold or silver Chrysler or Dodge minivan.

“Citizens are reminded to check for protective tape covering the openings on gas pump access doors. If the tape appears to have been tampered with, do not use the pump and immediately inform a clerk,” a release from Grand Rapids Police says.

Anyone with information on this incident is asked to call Silent Observer at 616-774-2345.