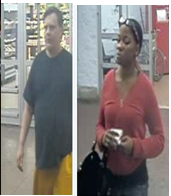 PORTAGE, Mich. — Portage Police are asking for the public’s help identifying two people who they say have been using counterfeit money in the area.

Portage Police believe the suspects were involved in at least three counterfeit incidents that happened at the end of September and October.   No other information about the case is available at this time.