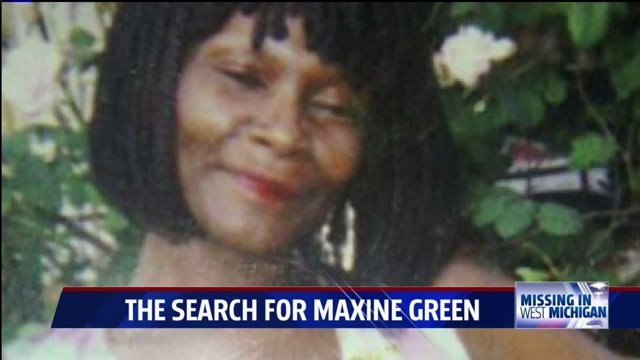 GRAND RAPIDS, Mich. -- It's been a year and a half since Maxine Green -- the sister of legendary soul singer Al Green -- was reported missing.
Maxine was last seen in September 2013 on the northwest side of Grand Rapids -- and since then she's seemingly vanished without a trace.

As her family and the Grand Rapids Police Department continue their search, they're asking for help -- hoping tips will lead to the answers of what happened to Maxine.

“She has people. She has family. She has grandkids. She has brothers and sisters. We just want to know where she is,” Maxine's daughter Lasha Green says.

“She would say she’s still young and, you know, she would always keep everyone laughing and cracking jokes and stuff like that.”
A 61-year-old mother of 8 and grandmother to more than a dozen, Maxine disappeared from the streets of Grand Rapids she was well-known on.

“Over the last year and a half, I’ve been corresponding with a private investigator that’s been helping out with this case also,” Lasha says.
But Maxine's daughter says her Grammy-winning uncle has not been a part of their family's search.

“I can’t answer why Al Green has not even reached out -- just reach out, talk to the public. Let the public know that your sister is missing out of Grand Rapids, Michigan,” Lasha says.

Maxine was initially reported missing from her assisted living home in August 2013 -- but investigators says she was last seen the weekend of September 6th.

It’s something Lasha has feared her whole life.

In her earlier years, Maxine and her brother were two of a kind, Lasha says.

“She was working for her brother and they was best friends -- best brothers and sisters -- best friends. Had the closest relationship out of all the sisters and brothers -- Maxine Green and Al Green was the closest,” she says.

Grand Rapids Police Lieutenant Pat Merrill is actively working the case, transferring it over to his major case team. He says their best lead on Maxine came right after she disappeared.

“As soon as Maxine went missing, we had activity on her bridge card -- and we ended up with some footage that ended up getting aired to locate the person who had used her bridge card. They came and contacted us -- talked openly about how they came into possession of the card,” Merrill said.

Police have determined that person paid Maxine cash in order to use her bridge card funds. They say that person is not considered a suspect -- and the trail has been cold ever since.

“She’s a small woman. She’s relatively frail. She has a number of addiction issues. She has mental illness issues,” Merrill says.

Which is why family members have come together, raising $1,600 for a reward.

“If it leads us to her, you can have the reward,” Lasha says.

They’ve set up a GoFundMe page for the public to donate -- in the hopes that Al Green would also contribute.

“I cannot explain -- and for him to be that well known -- even if you don’t put nothing toward a reward...he promised to send,” Lasha says. “He never sent anything.”

But she says it not too late for him to help spread word of their search.

“You just never know if it’s coming from a person like Al Green," she says. "Millions of people love Al Green."

Something other family members and the Grand Rapids Police Department say they won’t back down on.

FOX 17 reached out to Al Green for comment on the story -- but calls were not returned.

Anyone with information on the disappearance of Maxine Green can call the Grand Rapids Police Department or Silent Observer at 616-774-2345.