Family: Deputy who died of heart attack was a newlywed, proud public servant 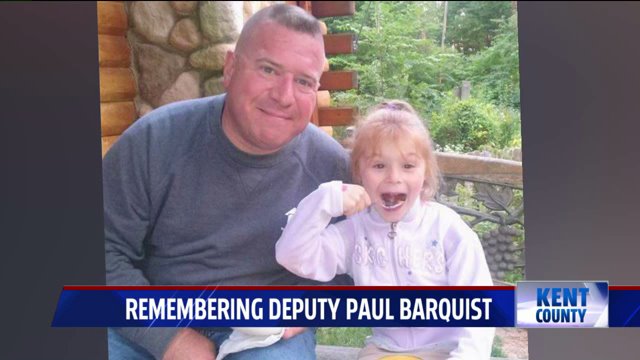 KENT COUNTY, Mich. -- A Kent County Sheriff's Deputy who just got married over the Summer, suddenly passed away this morning from a heart attack.

Deputy Paul Barquist spent 18 years on the force, after serving in the military.

Even though he didn't die in the line of duty, the community he served is rallying support for his wife and family.

"It really was the greatest day of both of their lives, and you could still see it on their faces. I mean even if you saw them yesterday, just the giddiness. The happiness," said Sternisha.

The two newlyweds were also parents and grandparents, which was a role that Deputy Barquist was more than willing to fill.

"If you saw the pictures of him playing with these kids, not only did he make the best husband for my sister, he just instantly was the greatest grandpa," said Sternisha.

As a Kent County Sheriff's Deputy, Barquist's file is filled with personal thank you letters from community members and achievements. Those include two life saving awards after pulling someone from a burning home, and another from a burning car.

Sternisha first met Barquist 25 years ago, when the two were in the same police academy. It wasn't until his sister started dating Barquist, when the long lost friends were reunited.

"My sister introduces me to this awesome Paul guy that she is going to marry and we are looking at each other like, we recognize each other," said Sternisha.

Also serving in the U.S. military, Deputy Barquist was an avid reader and history buff. He was also a lover of the outdoors, which made him proud to call west Michigan home.

"There's been a steady stream of police officers going through the home, making sure they have whatever they need, bringing food," said Sternisha.

Friends and family have also reached out in support for Deputy Barquist and his wife, raising money for his widow. CLICK HERE if you would like to help with their fundraising efforts.