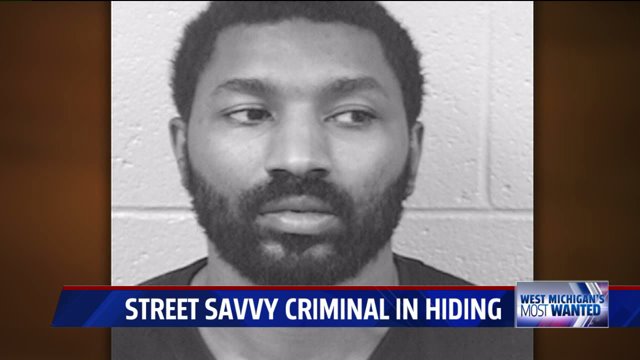 GRAND RAPIDS, Mich. -- U.S. Marshals say Dayrl Jackson shot into a family's home when children were inside, and at 29 he has made trips in and out of prison for years.

“He knows what he’s doing. He’s been in this game for a long time,” Deputy U.S. Marshal Benjamin Walkington said.

“We’re actively investigating, following up tips from people in the community who have seen him,” he said.

Walkington says they consider Jackson armed and extremely dangerous. “Based on his past, I would be very adequate to assume he is still dealing and selling drugs and maybe dealing in firearms, street level crimes he's always been a part of,” he said.

Jackson began serving prison time after a 2004 attempted armed bank robbery in Berrien County. “After he got out of prison he went back to Benton Harbor," ,” Walkington said. "He has many ties between Benton Harbor and Grand Rapids."

Jackson has had a lifetime full of drugs, guns, and life on the street. He’s now charged with crimes as recent as July of this year.

“He fired several shots into an occupied home where there’s believed to be at the time a mother and father and children at home,” Walkington said.

Jackson was arrested after running from police and was caught with drugs and guns. “He posted the bond with a bondsman, failed to show up to an arraignment approximately a week later, and he has not been seen since,” Walkington said.

It’s believed Jackson now splits time between his hometown of Benton Harbor and Grand Rapids, going back and forth to evade police. Walkington believes Jackson is receiving help from family, friends, and girlfriends.

But those who may be helping him are taking a big risk with possibly harsh consequences. “It is a crime to harbor a fugitive," Walkington said. "People are prosecuted every day for that."

He says Jackson knows to change cell phones and not to keep a number for very long and never to stay in one house for too long.

Authorities say there are people who know where Jackson is, and it’s time to come forward with information. Jackson is is described as 6-feet tall, weighing 175 pounds, and has brown eyes and black hair.

Jackson should be considered armed and dangerous and, according to family, maintains he won’t turn himself in willingly.