GRAND RAPIDS, Mich. (June 19, 2014) — It’s happened again. On Facebook, a friend and Michigan native, Sara Edwards, sent me the above photo Wednesday.  It was taken at a red light near Edwards’ Atlanta-area home.

Clear as day, the Lower Peninsula of Michigan in cloud form.  Backlit by the sun to trace beaches around the outer edges.  Saginaw Bay.  The Thumb. Even a Leelanau Peninsula.

This is far from the first time a photo of a state-shaped cloud has been shared on the Internet.  Pure Michigan helped this one go viral a couple of years ago:

So why are Michigan clouds so popular? Is it because residents are so proud of our unique shape?  What other states show up in the sky?  I was curious enough that I took to Google to see if I could find some (admittedly unscientific) answers.

One by one, I used Google image search to check for the terms “cloud,” “shape,” “state,” and the state’s name.  Most searches, at least through the first 20-30 results, showed photos of severe storms, interesting cloud formations (non-geographic), and other images of the state outline (non-meteorological).

Only in a few instances were there other states that showed up in clouds: 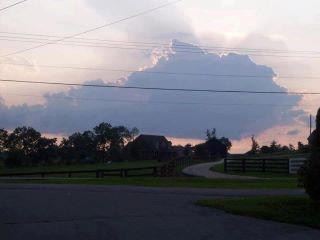 The winner by far in this unofficial contest of cumulo-geography was Michigan, with at least four different shots of similar clouds in the search results.  Here’s another example, from Internet user ‘timberdoodle’:

To be meteorological about it, one could theorize that the way clouds develop with vertical updrafts favors the shape of Michigan over other states.

But more likely is the idea that Michigan has such an easily-recognizable shape that we’re more likely to notice when we see it in the sky.  After all, you could probably make a case that most clouds look like Kansas, or Colorado, or Pennsylvania.

No matter the reason, we can look at it as more proof that we live in a great state of natural wonders.