Suspect Linked to Pair of Armed Robberies in Portage, Still at Large

PORTAGE, Mich (February 12, 2014) – Detectives with the Portage Department of Public Safety are looking for tips regarding an armed robbery suspect that’s linked to two separate robberies within the last week.

The first occurred at the Shell gas station in the 5000 block of West Main Street at around 9:00 a.m. Sunday, February 9th.

The second occurred around 1:30 p.m. the next day at the Woodbridge Harding’s store at 3750 West Centre Avenue.

At the grocery store, the suspect approached a counter armed with a knife demanding money.  He took some cash and left.  It appears there may have been a vehicle waiting to pick him up following the robbery in the parking lot.

In both incidents, the suspect was wearing a stocking hat with ear flaps, a dark jacket with quilted stitching, a black and white circle scarf, and red baggy sweatpants.  A small red passenger car in poor condition was seen in the area during both incidents. 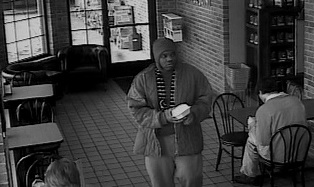