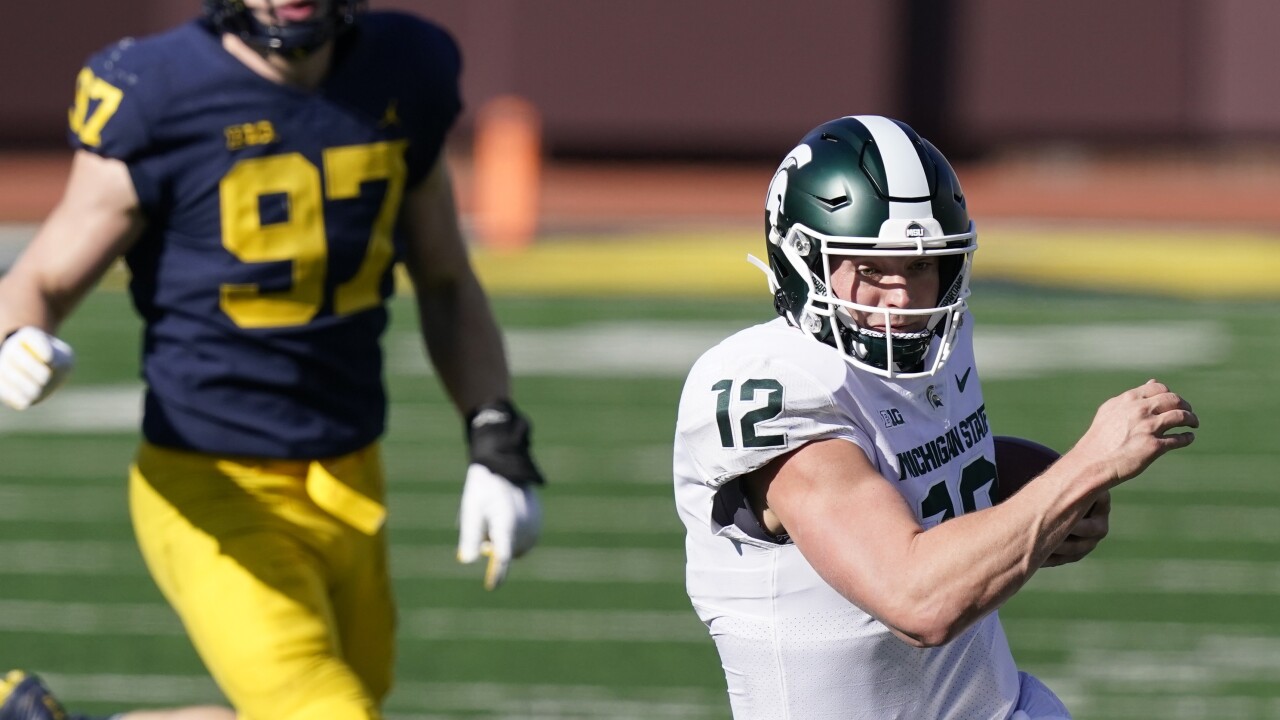 Four games into the season, Michigan State might be back to square one at quarterback.

At the very least, coach Mel Tucker has indicated that the competition is open this week.

“It’s really early in the week, we haven’t even put the pads on yet. We’ll do that later on today. We’ll see how it goes,” Tucker said Tuesday. “There’s nothing set in stone on this team. Every position is an evaluation every day.”

Rocky Lombardi began the season as the starting quarterback, but he was benched during last weekend’s loss to Indiana, and it’s not clear where Michigan State will go from here. The team has scored seven points in its past two games, with neither Lombardi nor Payton Thorne having much success moving the ball.

The quarterback situation was uncertain heading into the season. The Spartans needed to replace Brian Lewerke, and Lombardi, who had the most experience, got the start in the opener. He threw for over 300 yards in each of the first two games, and after an upset win at Michigan, he appeared to have taken control of the job.

Then came a 49-7 loss to Iowa in which Lombardi was intercepted three times. He threw two more interceptions against Indiana before being pulled. Thorne went 10 of 20 for 110 yards with an interception of his own in that 24-0 loss.

Lombardi, a redshirt junior, has an edge in experience. Thorne, a redshirt freshmen, may offer some upside if he can begin playing regularly so early in his career. Receiver Jayden Reed expressed confidence in both.

“I think they’re both good leaders honestly,” Reed said. “I have trust and belief in both of them. I believe in whoever’s out there with me, that’s how I look at it.”

Tucker said redshirt sophomore Theo Day and freshman Noah Kim also could be in the mix. In fact, he said basically every position is under constant scrutiny.

“Nothing’s set in stone. It’s compete and show us what you can do, and earn your spot,” Tucker said. “Earn your playing time, earn your right to be able to even stay on the team because this is not a recreational type of situation. This is compete to play, compete to stay.”

Tucker might have a few extra days to evaluate his team. The Spartans are scheduled to play at Maryland this weekend, but the Terrapins had coronavirus issues that caused their previous game against Ohio State to be canceled.

“Everything I’ve been told, they’re trying to play, and so we’re preparing to play,” Tucker said. “And I know that they want to play.”

Even if this game is played, the Spartans only have four remaining in this shortened regular season. There isn’t that much time left for any of the quarterbacks to show why he should be the person to lead the offense long term. That makes every game — and every coaching decision — all the more crucial.

“All of the calls that we make in terms of who starts games, they’re all important, and we don’t take them lightly, especially at that position,” Tucker said. “Obviously, we’ll make a decision and we’ll go.”