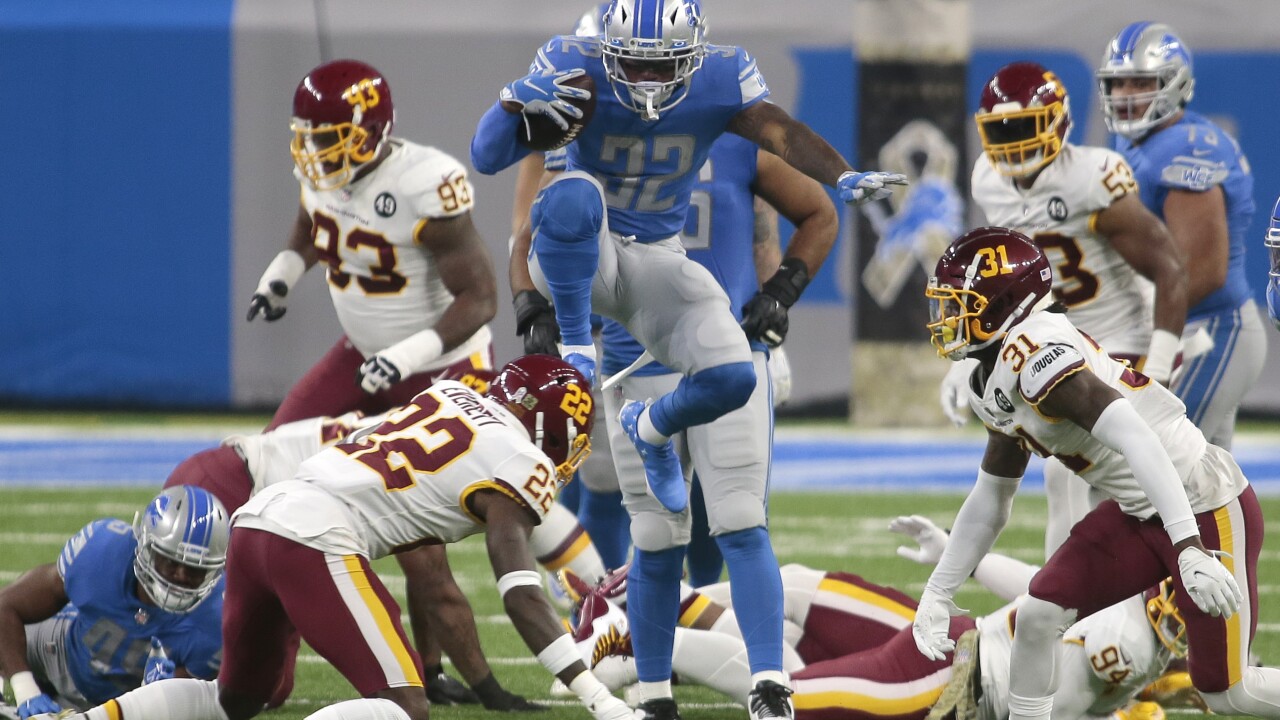 DETROIT - In between another fourth-quarter meltdown and Matt Prater’s 59-yard game-winning field goal, Lions fans may have rationalized to themselves, “Well at least D’Andre Swift did something productive in his first career start.”

The Lions (4-5) won Sunday 30-27 over Washington and the rookie running back stood out for two reasons. Swift was a dual-threat for the Lions rushing for 81 yards and adding 68 more in receiving. He also caught a 15-yard touchdown pass that eventually gave the Lions a 21-point lead.

“I think he (Swift) has done a great job building upon his repertoire of packages he is in and expanding that,” said coach Matt Patricia. “I think the great thing for us is to see his physicality, breaking some tackles.”

Swift got the start ahead of Adrian Peterson, who had started the previous eight games.

"I think I needed this kind of performance. My first NFL game, dropped the winning touchdown," Swift said. "It was a big game for me."

The Lions signed Peterson one week before the start of the season after he was released by Washington. Swift immediately showed the Lions’ coaches they made the correct change in the backfield. Detroit’s first series began on its 8-yard line. Swift ran for 32 yards and a couple of first downs before Stafford connected with Marvin Hall for a 55-yard touchdown pass.

“He made some great plays in the second half,” said quarterback Matthew Stafford.

Perhaps Swift’s biggest contribution came in the fourth quarter where the Lions were outscored 17-6. Washington tied the game at 24 after a touchdown and PAT with 6:09 remaining. On the ensuing drive, Swift carried the ball six times for 46 yards. The biggest play was a huge third down run for 17 yards, Swift’s longest in the game. That run also brought the Lions into field goal range at the Washington 35. Stafford was 1-3 in passing on the drive. Prater kicked a 37-yard field goal that gave the Lions a 27-24 lead. A lead that did not hold.

“I think he was very smart and aware in the situations we had,” said Patricia.

Peterson became the starter at the beginning of the season based on a Hall of Fame career. But the 35-year old’s productivity began to decline after the first game of the season when he ran for 93 yards against Chicago. In the Lions’ two previous games - losses against the Colts and Vikings respectively - Peterson ran for 38 yards on 13 carries. So Swift, the Lions second-round pick in this year’s draft, appears to have secured the starting job.

Sunday’s strong performance comes after making a terrible impression in the first game of the year. Swift dropped the winning touchdown pass in the first game of the season against Chicago. Interestingly, Swift has become a real threat catching the ball since then. He leads all Lions running backs with 275 yards in receiving and is fifth on the team overall.