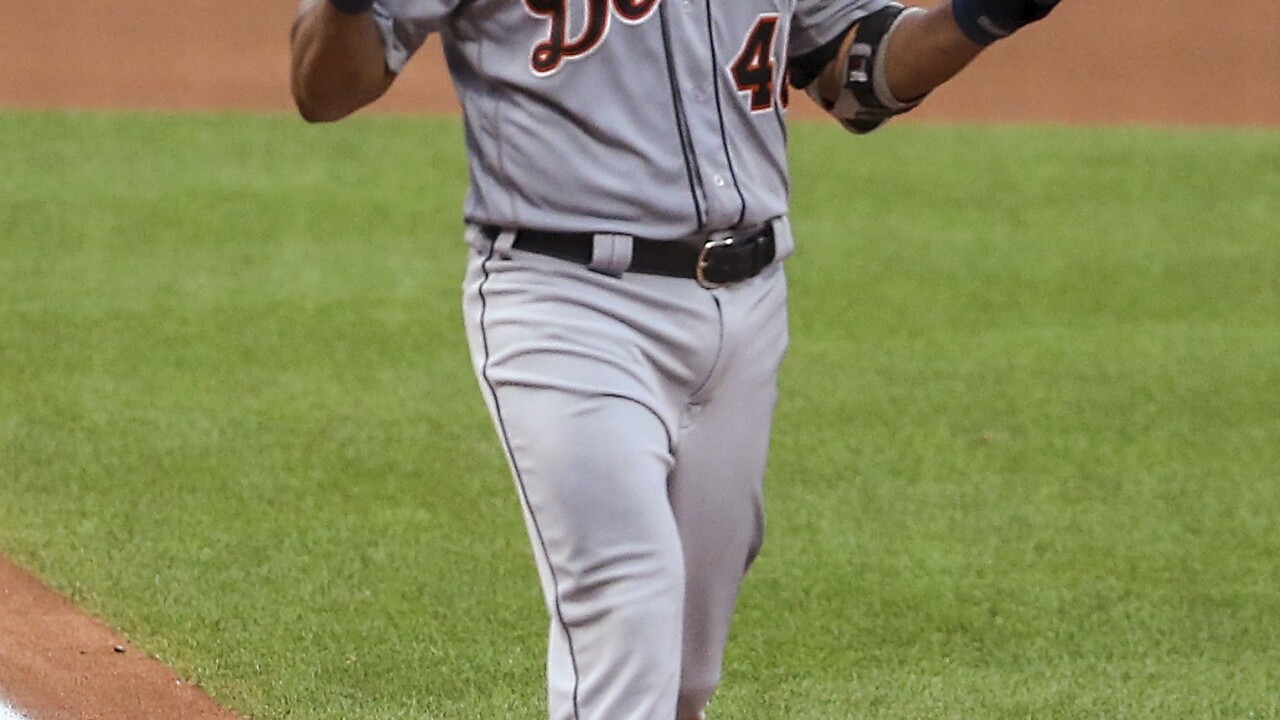 ST. LOUIS -- Jeimer Candelario capped off a two-homer day with a two-run, bases-loaded single in the seventh inning to help the Detroit Tigers beat the St. Louis Cardinals 6-3 on Thursday for a doubleheader split.

The Cardinals won the opener 12-2 behind a five-homer attack.

In the first game, Yadier Molina, wearing uniform No. 21 in honor of Roberto Clemente, hit a go-ahead, two-run homer in the second inning for the Cardinals.

Candelario hit a two-run homer in the first game and added a solo shot in the nightcap.

Jose Cisnero (2-2) picked up the win for the Tigers. Giovanny Gallegos (1-2) took the loss.

The highlight of the Cardinals' six-homer day was Molina's emotional blast.

The normally stoic Molina jumped into the air after passing first base and appeared to wipe away a tear with his uniform sleeve as he approached home plate.

Born in Bayamon, Puerto Rico, Molina was among players from the commonwealth who wore the number as part of Major League Baseball's tributes this week to Clemente, who died when a plane crashed en route to a relief mission in Nicaragua on Dec. 31, 1972.

Molina put St. Louis ahead 2-0 in the second against Tarik Skubal (1-2) with his third home run this season. With his 158th home run for St. Louis, Molina passed Johnny Mize and moved into sole possession of 10th on the Cardinals career list.

Molina has said Clemente was his childhood hero, and Molina received the 2018 Roberto Clemente Award, awarded annually to a player who exemplifies sportsmanship, community involvement and the individual's contribution to his team.

The Tigers were coming off a 19-0 loss to Milwaukee on Wednesday, the largest defeat in franchise history.

"I don't feel like he shows emotion too often," Flaherty said. "But when he hit that home run, he was pretty pumped. That was fun to see. He was fired up."

Thomas and O'Neill hit two-run homers in a seven-run third that boosted the lead to 9-0.

Goldschmidt hit a solo drive in the fourth to mark his 33rd. birthday. He became the first St. Louis player to homer on his birthday since Randal Grichuk at the Chicago Cubs on Aug. 13, 2016.
Skubal gave up six runs and three hits over two-plus innings.

BUSY BIRDS
St. Louis played its seventh doubleheader this season, including three in six days. They were idle for 16 days earlier this season after 10 players tested positive for COVID-19.

TRAINER'S ROOM
Cardinals: RHP Johan Oviedo was placed on the injured list after coming into contact with someone who has tested positive for COVID-19. Oviedo did not show any symptoms and could return next week. OF Austin Dean was activated from the IL. He had not played this season and was on the IL while following COVID-19 protocols.

UP NEXT
Tigers: Detroit starts a three-game series Friday at the Chicago White Sox. RHP Lucas Giolito (4-2, 3.29) Giolito, who pitched a no-hitter against Pittsburgh, is scheduled to start for Chicago.

Cardinals: RHP Adam Wainwright (4-0, 2.68) is to face visiting Cincinnati and RHP Luis Castillo (1-5, 3.95) in the opener of a three-game series on Friday. Wainwright has won his last two starts. allowing four earned runs over 15 1/3 innings.