Pandemic causing you to have weird dreams? You're not alone 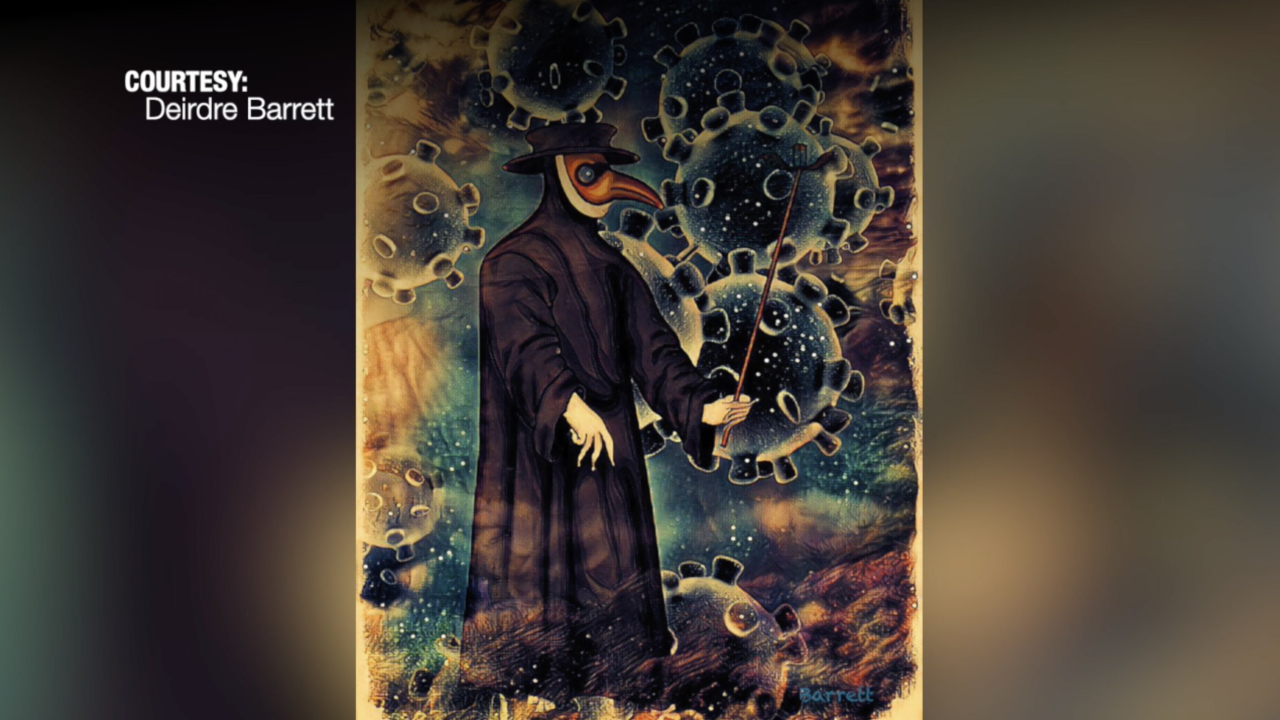 Dreams are inevitable and a natural part of our sleep cycle. But have you noticed your dreams are weirder than normal since the pandemic started? If so, you’re not alone.

“I have crazy, crazy dreams," Michael Browne said. "Not scary at all, not nightmares, but just really vivid and long. It's every night. It's several times throughout the night every night.”

Michael Browne is on week 10 of working from home. He says his change in routine has thrown off his sleeping schedule, and his dreams seem to be getting wilder by the night. Most recently, he remembers having a dream that was particularly stressful.

“I was required to do some sort of job that I never had been trained to do, that I didn’t know how to do. Somehow I’d gone for eight years of not knowing how to do this job,” Browne said.

When asking if others were experiencing something similar on Facebook, he got quite a few responses from friends.

Barrett is a dream researcher at Harvard University and the author of The Committee of Sleep . She analyzes dreams after crises like WWII, 9/11, and now, the COVID-19 pandemic. On March 24, she released a dream survey study to the world.

“It collects just a few demographics from people – age, gender, nationality – and then a few specific questions about any special contact with the virus like being healthcare provider, having had a severe case, or testing positive. And then you leave your dreams,” Barrett said.

She says there are a lot of commonalities between dreams people are having now and dreams people experienced during other traumatic events in modern history. Dreams about tornadoes, hurricanes, wildfires and mass shooters. During this pandemic, people have also been dreaming about contracting the virus.

“People will dream either realistically that they’re having trouble breathing or they’re spiking a fever, or they’ll have unrealistic things like one woman looked down at her stomach and saw blue stripes and in her dream that was supposed to be the first sign of coronavirus.”

There is one category of dreams that’s been completely unique to this study.

“Dreams about bug attacks. I’ve seen just about every kind of bug imaginable. Swarms of bees flying at the dreamer, hornets, armies of cockroaches racing at them, masses of wriggling worms, and giant grasshoppers with vampire fangs,” Barrett said.

According to Barrett, dreams can be very metaphorical. And her guess about these dreams involving bugs? The word “bug” is also associated with virus or somebody who is sick. New York resident Paola Fernandez says she had a vivid dream involving bee honey.

“The one I had most recently that I remember was I was looking at myself in the mirror, and my eyebrows were dripping honey. And I kept brushing it off with a wipe, but it kept dripping honey,” Fernandez said.

Barrett says many people’s dreams have also involved political figures or other celebrities. Fernandez says she remembers a dream like that as well.

“I was driving around the city and it was empty, but then I saw Lady Gaga walking down the street and then I turned a corner and saw Antonio Banderas outside a hotel all dressed in a tuxedo trying to hail a cab, but there were no cabs, so he just looked very annoyed,” Fernandez said.

Barrett says our dreams can show us what’s causing anxiety, whether that’s getting the virus, or not being able to go out and do the things we’d normally be doing. Dream recall is more likely if you’re waking up while you’re in that dream state. If you're having disturbing nightmares every night, Barrett says there's something you can do to prevent them.

“The best technique to decrease repetitive anxiety dreams is to think about what you would like to dream about, maybe there’s a person you’re not getting to see, or a place you’d like to visit, or lots of people like flying dreams, or maybe you’ve had another dream that you enjoyed in the past," she said.

Barrett says to think about that thought over and over again as you’re falling asleep and try to imagine what it’d look like. It doesn’t work every time, but she says it can greatly improve your chances of having a dream you would actually enjoy.