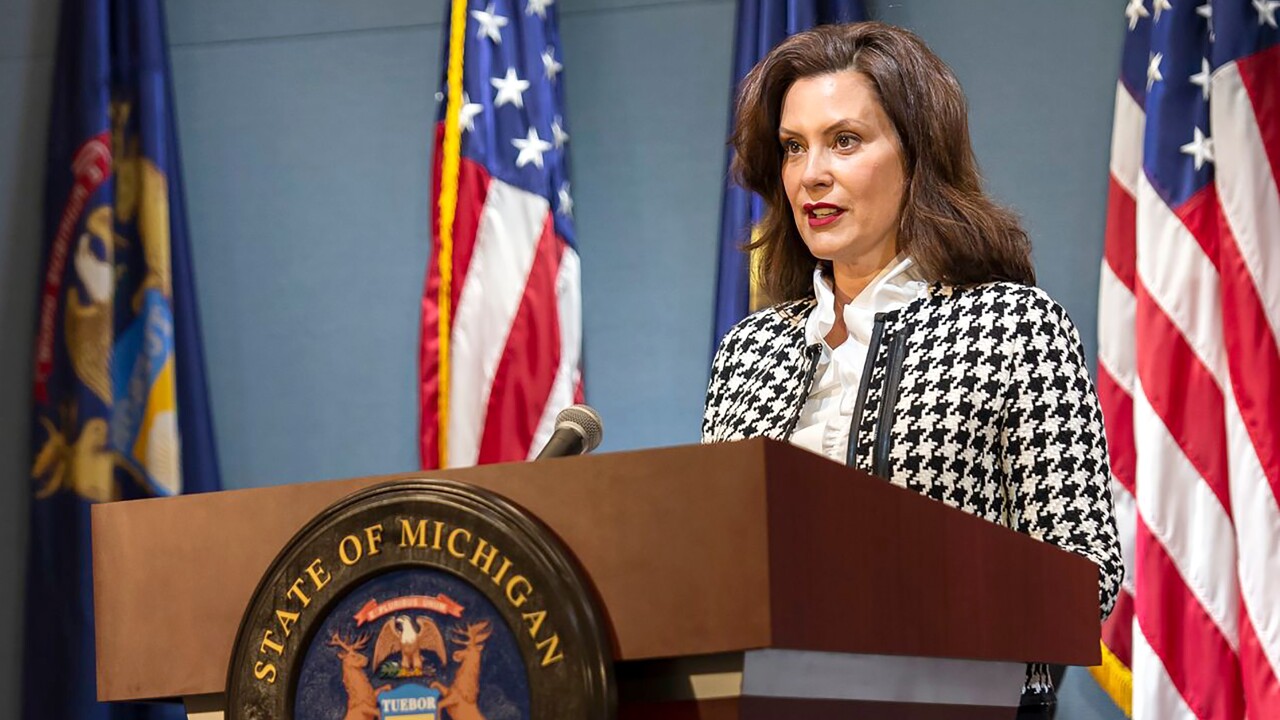 Copyright 2020 Scripps Media, Inc. The Associated Press contributed to this report. All rights reserved. This material may not be published, broadcast, rewritten, or redistributed.
AP
In this photo provided by the Michigan Executive Office of the Governor, Gov. Gretchen Whitmer speaks during a news conference Tuesday, May 26, 2020, in Lansing, Mich. Whitmer announced that people who leave their home for work or those who have coronavirus symptoms can be tested without needing a doctor's note. It was the state's latest move to expand COVID-19 testing, which is seen as a critical to slowing the virus particularly as the governor loosens stay-at-home restrictions. (Michigan Executive Office of the Governor via AP)

LANSING, Mich. (WXYZ) — A Wisconsin man is the eighth person charged by the state for his alleged role in the kidnapping plot of Michigan Gov. Gretchen Whitmer.

Brian Higgins, 51, from Wisconsin Dells, Wisconsin, was charged with material support of an act of terrorism, a 20-year felony.

Higgins allegedly provided assistance in the plan to kidnap Whitmer, according to the Attorney General's office.

RELATED: What you need to know about the Wolverine Watchmen militia

“While the political rhetoric in our nation may at times be divisive, I am encouraged by the united front our law enforcement community has displayed in response to this indescribable act of terror,” Nessel said. “These were very credible, and very serious threats to our elected officials and the public in general, and the swift actions taken by state and federal authorities this past week are nothing short of heroic.”

In all, there are 20 different state felonies charged against eight people. Six other people are facing federal charges.

Higgins was arrested in Wisconsin on Thursday and is expected to be extradited to Michigan and be arraigned in Antrim County. All but one of the six defendants charged last week have been arraigned and are in custody in Michigan jails. Paul Bellar is still facing extradition from South Carolina and is scheduled to be picked up on Oct. 27.