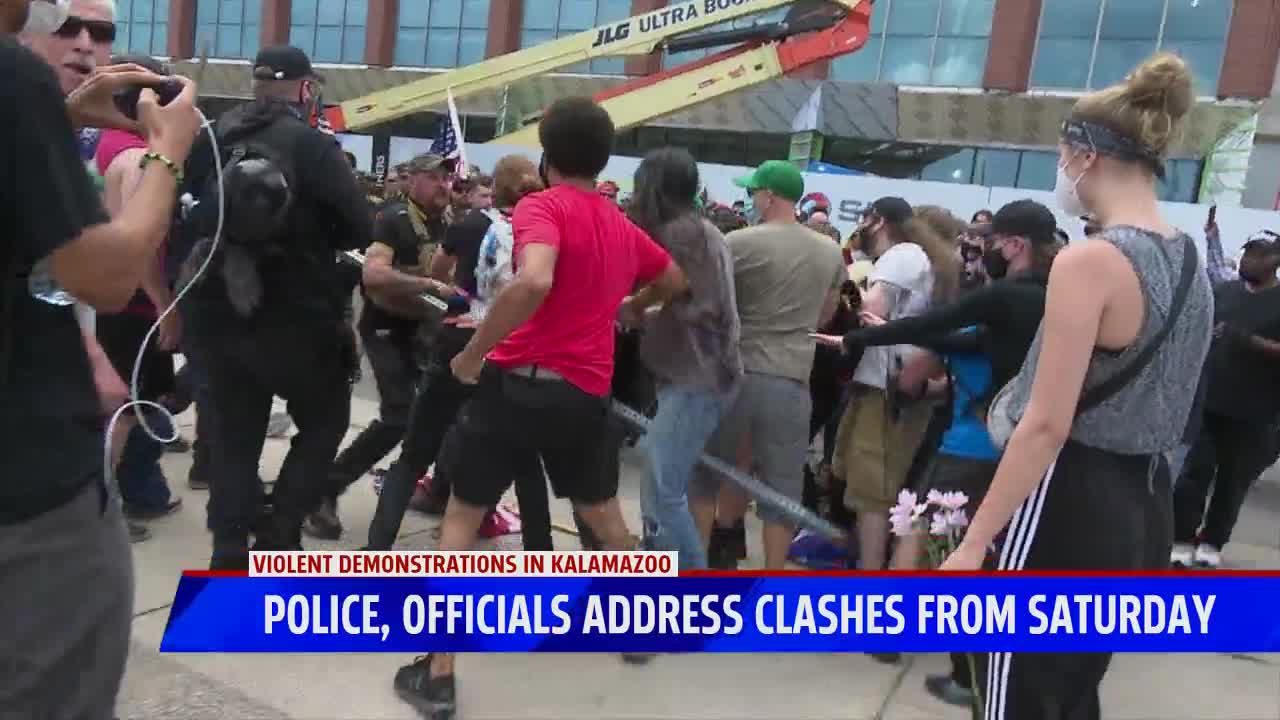 KALAMAZOO, Mich. — Officials in Kalamazoo responded Sunday after violence broke out Saturday between counter protestors and what’s been identified by the Southern Poverty Law Center as a hate group.

The city and police response during the Proud Boys visit frustrated counter protestors with many describing it as inadequate and feeling as if police protected the neo-facist group.

“Zero support for their tactics and for their views,” said Kalamazoo Mayor David Anderson.

The violence started around 1:30 p.m. Saturday and lasted about 15 minutes.

The Proud Boys marched down Water Street when counter protestors participating in a permitted, peaceful protest at Arcadia Creek Festival Place began walking alongside them.

The two groups started yelling at one another before tensions turned physical.

“The views of the Proud Boys that came here and tried to destroy our community are abhorrent,” said Ritsema. “Hate and violence are not welcomed in Kalamazoo.”

KDPS says they first learned of the group’s plans to come to town in July, but attempts to learn more proved unsuccessful.

Police say no one associated with the Proud Boys filed a permit, however Kalamazoo officials explained group do not necessarily have to depending on where in town they want to meet.

When asked if the city would consider changing that to prevent other hate groups from coming in to town, he said it’s possible.

Thomas added there were numerous officers in unmarked vehicles as well as a sniper.

“We were prepared for this event,” said Thomas.

A small group of Black community activists at Sunday’s press conference made three demands to the city, which include all charges to be dropped against the people arrested Saturday, the defunding of KDPS and reallocation of those funds to Black-led initiatives in Kalamazoo, and for police body camera footage from Saturday’s event to be released.

They also asked numerous questions, specifically on what counter protestors viewed as police allowing the Proud Boys to leave freely, by blocking off the garage where they parked and declaring police zones at Arcadia Creek.

Thomas said their goal was to get at least one of the groups out as quickly as possible.

“Many of the things occurred after we were able to get the Proud Boys out of town and after leaving the parking ramp and yet we still had this chaotic situation that they had created,” said Thomas.

“The Black Lives Matter protest is for the uplifting and humanization of Black lives, whereas Proud Boys specific agenda was to spew hate and fear into this community, so it [the response] should have been a flip,” said one activist.

KDPS said nine adults, including an MLive reporter, and one juvenile were arrested during the protests.

The child was released according to police.

Charges have been dropped against the MLive reporter. Thomas apologized and said it should not have happened.

Police did not have demographic information about the people arrested, but did not believe any of the Proud Boys were included.

Anderson says he requested charges be dropped against the five cases that went to the city.