Department of Justice considering sedition, conspiracy charges in assault on US Capitol 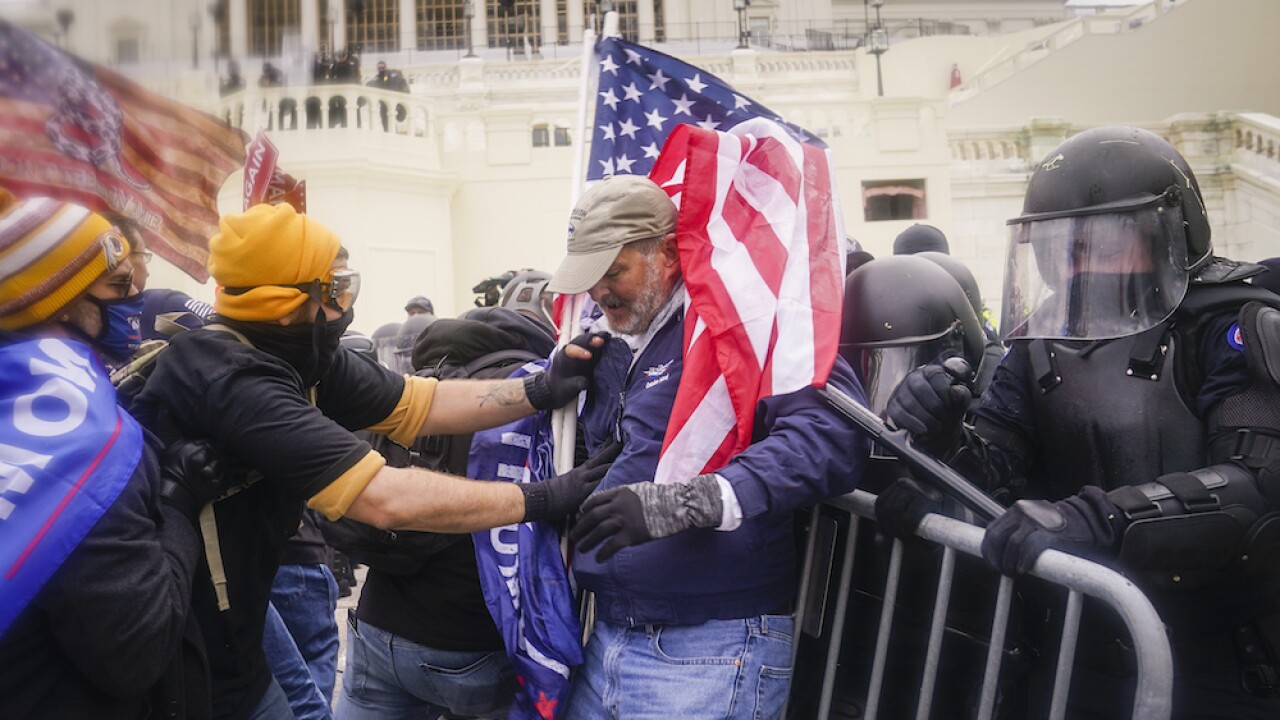 John Minchillo/AP
Supporters loyal to President Donald Trump clash with authorities before successfully breaching the Capitol building during a riot on the grounds, Wednesday, Jan. 6, 2021. A number of lawmakers and then the mob of protesters tried to overturn America's presidential election, undercutting the nation's democracy by attempting to keep Democrat Joe Biden from replacing Trump in the White House. (AP Photo/John Minchillo)

WASHINGTON, D.C. – In an update on Tuesday, the Department of Justice said it has opened at least 160 case files in the past six days related to the assault on the U.S. Capitol and about 70 suspects have already been charged.

Michael Sherwin, the acting U.S. attorney for the D.C. area, said he expects hundreds of criminal cases to be filed related to the mob of Trump supports who violently stormed the building during Congress’ joint session to confirm Joe Biden’s Electoral College win.

Sherwin highlighted that the department is “looking at significant felony cases tied to sedition and conspiracy.” He said the charges have prison terms of up to 20 years.

He added that some of the misdemeanor charges that’ve already been brought against the people who stormed the Capitol were intended as placeholder counts and that more serious charges are possible, including sedition. Sedition refers to the act of inciting revolt or violence against a lawful authority with the foal of destroying or overthrowing it.

Steven D'Antuono, the FBI’s assistant director in charge of the Washington field office, said the bureau has received more than 100,000 pieces of digital media since it asked the public for help identifying those who stormed the Capitol last Wednesday.

D'Antuono said the FBI is looking into each piece of media for investigative and intelligence leads, but the bureau is still asking the public to submit images and tips at FBI.gov/USCapitol.

Before the President Donald Trump’s rally on Jan. 6, D'Antuono said the FBI worked internally with its field office to look for intelligence about potential violence during the event and evidence was uncovered.

“We developed some intelligence that a number of individuals were planning to travel to the D.C. area with intentions to cause violence,” said D'Antuono. “We immediately shared that information and action was taken as demonstrated by the arrest Enrique Tarrio by the Metropolitan Police Department the night before the rally.”

The officials said the probe into last week’s event’s will be a long-term investigation and many law enforcement agencies are in it for the long-haul.

“This is only the beginning. This is not the end,” said Sherwin.

Watch the briefing below:

Tuesday's press conference was the first briefing from federal law enforcement regarding the insurrection.

At that press conference, D.C. police officials reported that 68 people were arrested in the hours during and after the riots. Several more people who featured prominently in the vandalism have been arrested across the country in recent days.

Five people were killed during the Jan. 6 riots, including a Capitol police officer. One Trump supporter was shot as she attempted to breach a secure hallway that led to the House chamber, and three other people died after suffering medical emergencies during the insurrection.

A second Capitol police officer who responded to the riots died over the weekend by taking his own life.