Michigan silences critics in rout of No. 8 Notre Dame 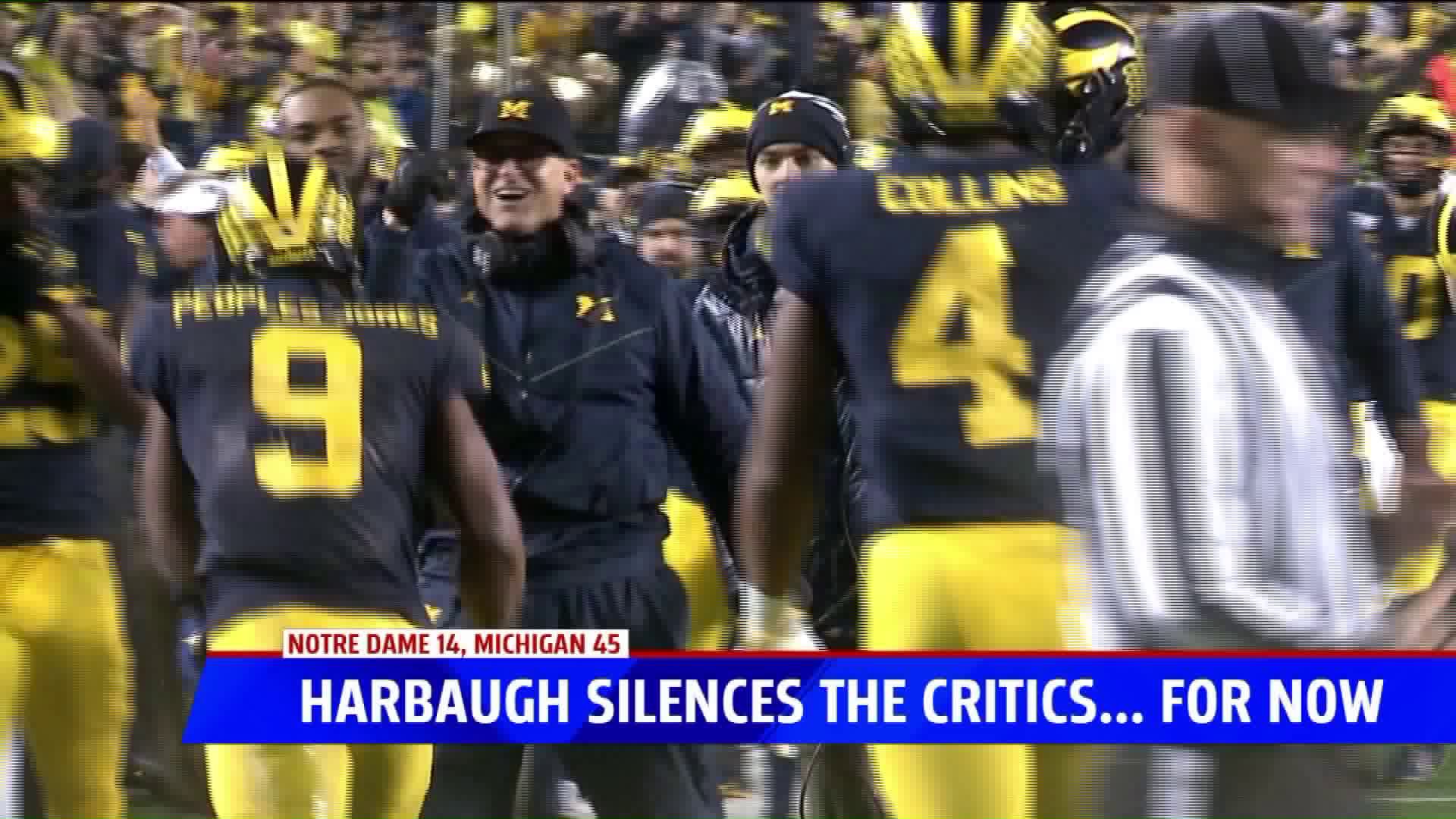 The 45-14 win was the first time the Wolverines beat a ranked opponent this season.

An offense that has struggled all year to create explosive plays found a way to do that Saturday. Michigan had four runs of at least 20 yards in the first half alone, equaling the total from the previous seven games combined.

“Watching them prepare, watching them practice, watching the details in the meetings, just how important it was to them,” Harbaugh said. “I just think they’re getting better, that’s why — I’ve said it now three or four times — I really respect our players to have that kind of mindset.”

“The offensive line did their job, they made those holes and I did my job,” Haskins said.

Michigan finished with a season-high 303 yards on the ground. Freshman Zach Charbonnet was also a key contributor, gaining 74 yards and scoring two touchdowns.

“Defensively, it was a great performance,” Harbaugh said. “We were just running so good, the knock-back in the defensive line was outstanding, really good coverage … (Defensive coordinator) Don Brown called a really great game, he really had them wired.”

Notre Dame didn’t score until the third quarter after a questionable pass interference call turned a Michigan interception into a first down for the offense, leading to a touchdown a few plays later. The only other Irish points came after the game was out of reach.

Senior Josh Metellus said the team had a good gameplan coming into the week and felt like they could keep the Irish from scoring.

“The type of offense that they run, they try to stick to the same type of script and get the same guys the ball,” he said. “They don’t like to go outside their frame and the type of stuff they like to do in their scheme.”

Metellus said the defense knew Notre Dame would try to focus on what they have struggled to defend this season and they were prepared to stop that this week.

Michigan went into halftime leading 17-0 by controlling the line of scrimmage on both sides of the ball. The Wolverines gained 5.8 yards per carry while holding the Irish to less than 2 yards per play in the half.

Metellus said the team has had problems overcoming slow starts but becomes unstoppable once they got rolling.

The Wolverines' win Saturday gives them a 2-8 record against top-10 opponents under Harbaugh. They will get another chance to improve that record at home when Ohio State travels to Michigan Stadium for the season finale in November.