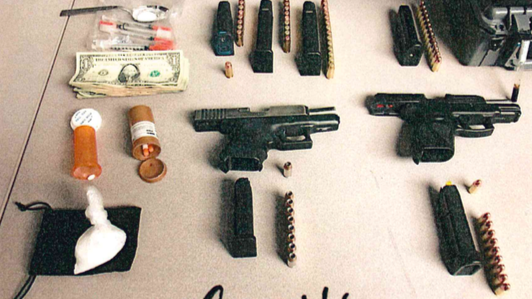 THREE RIVERS, Mich. – A St. Joseph County couple is in jail after being arrested on narcotics and weapons violations.

Three Rivers police say they pulled over a vehicle Wednesday night on a minor violation and found a 28-year-old woman who was wanted on a Felony Warrant. The man driving the vehicle, a 30-year-old Three Rivers resident refused to allow officers to search the vehicle.

K9 Django was sent to the scene and alerted officers of the presence of drugs. The officers were then able to search the vehicle and they say they found two loaded handguns, illegal prescription pills, needles and over an ounce of crystal methamphetamine.