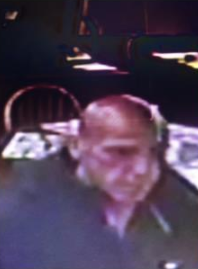 SCHOOLCRAFT, Mich. — Police in Schoolcraft are looking for a man who allegedly used counterfeit money at an area restaurant.

The suspect is described by police as a bald man in his 40s or 50s with a medium build. Authorities released two surveillance images of him on Thursday.

Police say he may have gone to the restaurant on a moped or small scooter.