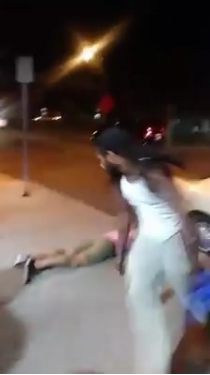 GRAND RAPIDS, Mich. — Grand Rapids Police say they are looking for a man who allegedly knocked another man unconscious and then robbed him.

The incident happened at about 2 a.m. July 8 along Weston Street SW between Division Avenue and Commerce, according to a Tuesday press release from police.

Police say a 29-year-old man was hit from behind by another man and then fell unconscious.  The suspect then went through his pockets and robbed him.

After the robbery, police say someone started using the victim’s credit cards at several locations in the Grand Rapids area.

The man who was hit in the video regained consciousness before being taken to the hospital, according to a release. Police said Tuesday that his injuries do not appear serious.

Two images released by police on Tuesday show a suspect in the assault and robbery immediately after the incident and a person of interest who allegedly later used  a stolen credit card from the robbery.