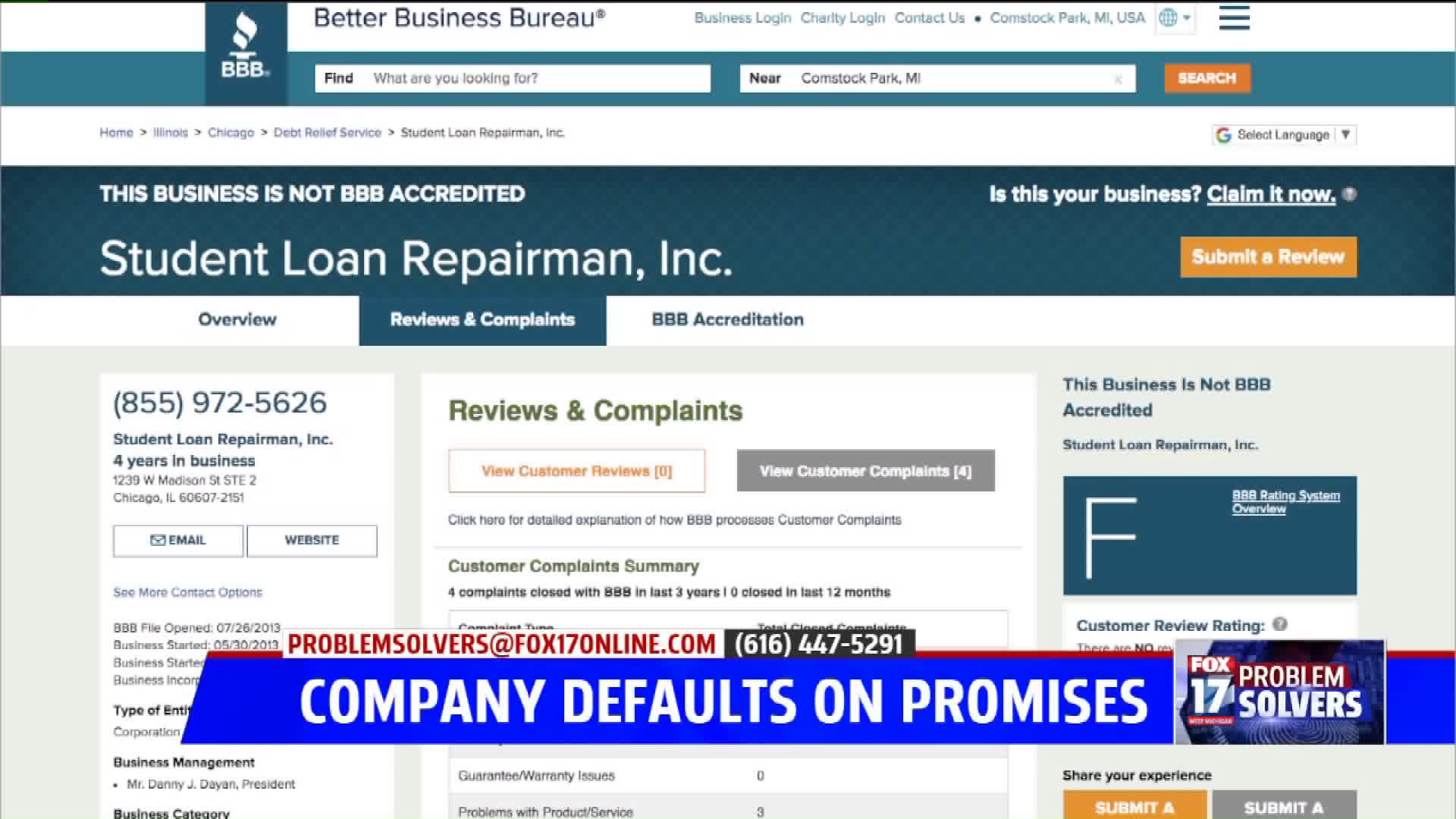 MUSKEGON, Mich. -- Jacqueline Thomas wanted to straighten out her finances, which she said were ruined by college debt, but her efforts only made things worse. Now she wants to warn others to do their research.

Saddled with $65,000 in student loan debt, Thomas said an offer back in 2014 from Student Loan Repairman turned out to be too good to be true.

The Chicago-based business caught her attention onlineand she dealt with its senior attorney Cortney Lamb. "He told me he'd be able to erase my financial student loan debt, or he would be able to consolidate it and downsize it where it wasn't that much, like cut it in half. My payments wouldn't be as much."

Thomas filled out the contract Lamb sent to her and paid the company $800 upfront. According to the contract, of that amount, an initial $100 was for them to get started. The rest  was to go towards the debt consolidation services.

"And we talked maybe two or three more times, and I heard no more from him," Thomas recalled. "And I tried to contact him, and the line was disconnected, and the number was no longer working. So it was just like they dropped off the face off the earth."

John Masterson  with the Better Business Bureau said laws were broken. "Asking for that fee upfront before services are rendered is illegal. This is something where, to have the best interest for you, someone needs to actually help you before you pay them."

Masterson said it's always best to do research on debt consolidation services. "If there are supposedly new things coming out that could erase all your debt, don't take it at face value. Definitely look online. Go to the source like the FTC or the Better Business Bureau that provide trusted resources that you can rely on," he said.

FOX 17 found Student Loan Repairman has an 'F' rating with the BBB. The president of the company is listed as Danny Dayan. The website no longer works, and the phone number has apparently been reassigned. A public records search shows SLR's license was allegedly revoked months after Thomas's experience. It's not clear why.

People should be aware to check into things and not just jump into things," Thomas said. "Like they say, 'If it sounds too good, it probably is.' And you should check it and see, because nobody get something for nothing."

FOX 17 talked to attorney Cortney Lamb, who said he started working at Student Loan Repairman fresh out of school and added that he had nothing to do with the financials and that he worked for the business for eight months before quickly moving on. FOX 17 left messages for possible numbers for Daniel 'Danny' Dayan, and we are waiting to hear back.