HOLLAND, Mich. — Authorities in Holland are searching for the suspect in an armed bank robbery.

The robbery was reported at about 3:18 p.m. Wednesday at the Macatawa Bank, 701 Maple Ave. The Holland Department of Public Safety says a man entered the bank with a handgun and demanded money.

The suspect was wearing a gray hooded sweatshirt, a black mask, sweatpants and white and red sneakers at the time of the robbery, police said.

Here are three surveillance images of the suspect released by authorities: 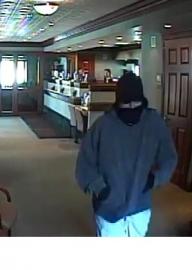