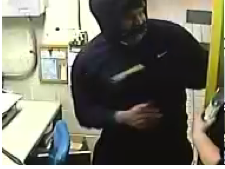 The robbery happened about 7:00 a.m. at the gas station at Broadway and Superior in South Haven.

Police describe the suspects as black men with light complexions.  Suspect #1 was about 30 to 40 years old, about 5’10” to 6’0″ with a stocky build and a big nose. Part of his face was covered with a dark blue handkerchief. He was armed with a two-toned semiautomatic handgun.

The second suspect was about the same size and in his early 30s. His face was covered with a Spiderman mask.  He was armed with a silver semiautomatic handgun.