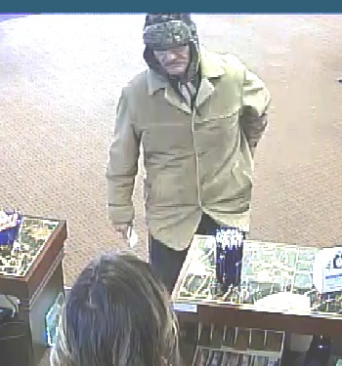 GRAND RAPIDS, Mich. — Authorities are searching for the man who they say robbed a Grand Rapids bank Monday.

The robbery happened around 12 p.m. at the Macatawa Bank, 2440 Burton St. SE.   Police say the suspect entered the bank and gave a note to the teller.

The suspect is described as a white man in his 50s who is about 6 feet tall with a thin build.  At the time of the robbery, he was wearing a winter hat, a tan jacket, dark jeans and dark shoes.

Authorities say he may have left the area in a burgundy sedan after the robbery.

The Monday incident is the second robbery at a Grand Rapids-area Macatawa Bank in four days.  The branch on Knapp NE was robbed Jan. 13.  Police are investigating whether the incidents are connected, according to a release.