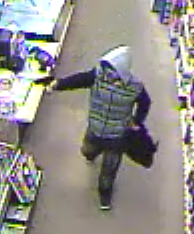 NEW ERA, Mich. – An armed robbery of a gas station in Oceana County is being investigated as connected to one that happened in Muskegon County earlier this month.

Oceana County deputies, along with Michigan State Police, responded to the robbery at the Wesco on 1st Street in New Era at about 2:30 a.m. Wednesday. The suspect fled the scene after getting an undisclosed amount of cash.

A captain with the Muskegon County Sheriff’s Office says they were called by Oceana County detectives after they looked at the surveillance footage. They believe the suspect may be the same man wanted in connection to an armed robbery at the J & H Family Store in Twin Lake July 10

The suspect in both instances is wearing a textured sweater and light-colored hood.

Anyone with information should contact the Oceana County Sheriff at 231-873-2121.