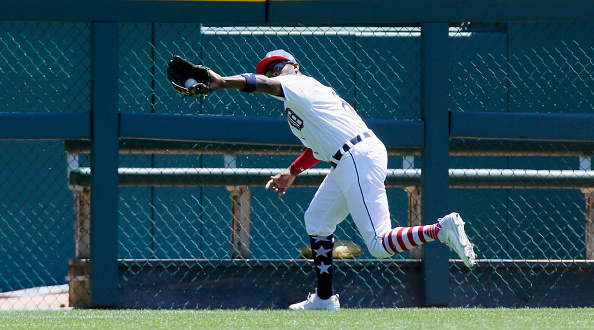 Justin Upton went 3 for 3 for Detroit, including a tiebreaking two-run single with two out in the seventh. Upton’s big day helped make up for the loss of slugger Miguel Cabrera, who left after six innings due to left hip tightness.

Fulmer (8-6) allowed two homers for the first time this season. Justin Wilson pitched a perfect ninth for his ninth save.

San Francisco right-hander Matt Cain (3-8) surrendered five runs and seven hits in 6 1/3 innings. He dropped to 0-7 in nine starts since beating the Dodgers on May 15.

The Giants jumped in front on Hunter Pence’s two-out solo homer over the out-of-town scoreboard in right-center in the first. The drive ended Fulmer’s homerless streak at 73 2/3 innings — the longest active streak in the majors.

Martinez connected in the second and hit an RBI single in the fourth for a 2-1 Tigers lead. The next batter, Nicholas Castellanos, made it 3-1 with a sacrifice fly.

The Giants flew out to the warning track four times in the first four innings, but only managed two hits. Fulmer’s command improved as the game went on, and he began to dominate in the middle innings.

But San Francisco rallied in the seventh. Brandon Belt doubled with one out and Brandon Crawford followed with a drive to right for his seventh homer, tying it at 3.