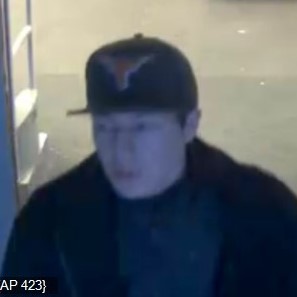 **UPDATE: 20-year-old Victor Aldofo Gonzalez, the suspect in the stabbing in attempted carjacking, was arrested Saturday morning after being shot by a police officer.

WALKER, Mich. — Walker Police have released surveillance images of a person of interest in the Thursday stabbing in the Meijer parking lot.

The stabbing was reported at about 8:13 p.m. Thursday outside the store at 2425 Alpine Avenue.

Police say a man followed a 25-year-old Grand Rapids woman to her vehicle and stabbed her multiple times during an attempted carjacking.  According to a release, a good Samaritan attempted to stop the man and was hit in the face before the suspect fled the area.

The person of interest in this case is described as a man between 5 feet 8 inches and 5 feet 9 inches tall with a medium build.  He was wearing a Texas Longhorns baseball hat and dark clothing at the time of the incident, police said.

The victim was hospitalized after the stabbing. Police say her injuries are considered non-life threatening. FOX 17 spoke with a family friend of the victim who says she's recovering but "in no shape" to share her story at the moment.

The non-profit Women At Risk International, or WAR, offers free self-defense classes for women bi-annually, with classes to be scheduled this spring, located at 2790 44th St. SW in Wyoming. Carol Mohr is an instructor who teaches these classes at WAR through Crusader Martial Arts and says self-awareness is critical.

“If you ever feel that twinge of discomfort, you need to listen to that because it’s that self-awareness that your body is trying to tell you that something’s not right," said Mohr.

“You need to listen to your gut, and if you’re going out into a parking lot, if it’s dark, if there’s something that you feel uncomfortable with, go back into the store, go back into the house, and regroup; see if a friend can walk you out or a store employee.”

In general when walking to your car or running for instance, Mohr recommends not being on your phone or wearing earbuds, always looking around and assessing your situation. Ultimately she says learn self-defense and know your skill set, relying on awareness before a weapon like mace.

“It is a combination of multiple hits or strikes, and we always recommend that you do a minimal three to five, just because it kind of throws the brain off," said Mohr.