CLIMAX, Mich. — A popular restaurant that's been a staple in the community for decades was destroyed by fire on Saturday.

Crews battled a large, quick moving fire at The Harvester restaurant, also known as Athena's, that broke out just before 10 a.m. Saturday.

Firefighters believe the blaze began in a residence behind the restaurant, but the cause remains unclear.

No injuries were reported. Everyone inside the building made it out safely, according to fire crews on scene. 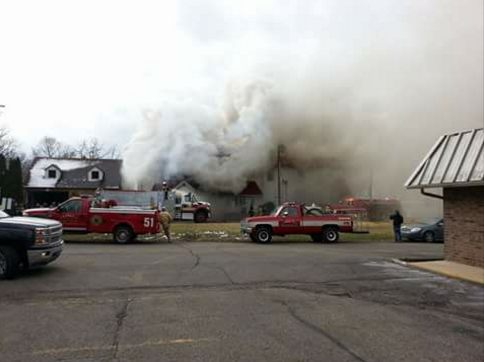 Witnesses said the building appeared to be a total loss.

The restaurant is described by fire crews and witnesses as the 'watering hole' in the community. The building is believed to have been built prior to the 1900s.

Climax is located in east-central Kalamazoo County, about halfway between Kalamazoo and Battle Creek.