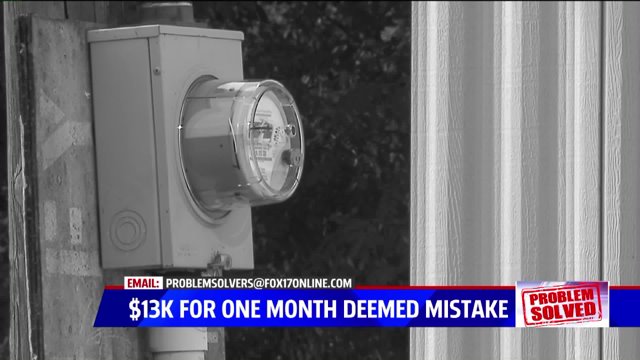 GRANDVILLE, Mich. --  A Grandville business owner's massive Consumers Energy bill was dropped after he mentioned that he called the FOX 17 Problem Solvers and complained to the state.

Ronald Hite runs C&R Mobile Wash, a power washing business in Grandville.   He's only had the business for a month, and says he risked it all to start it.

"All my savings...and I actually had an aunt help with all the investments," he said.

Hite said a bill like the one he received from Consumers would have basically ruined his new business.

"I went to the owner that owns this building and showed him the bill.  And they have six of these buildings and they have never seen a bill get this high," he said.  "Like the highest bill $200, $250 a month depending on how much they use on electricity."

He says he was told the smart meters don't lie. Consumers has told FOX 17 on numerous occasions that the estimated high bills from old analog meters would be solved by the installation of smart meters, but Hite had a smart meter, and this is the largest bill FOX 17 has seen from a viewer.

Consumers Energy had a change of heart when Hite mentioned the Problem Solvers.

"Within 24 hours I got a call saying it was a clerical error," Hite said.

Hite's bill was dropped to about $39.

Consumers said they have only had one other account of a smart meter having this problem.

The company issued the following statement about Hite's case:

FOX 17 reached out to the state who said the call center at the Michigan Agency for Energy did hear from Hite regarding the issue.

The Michigan Agency for Energy's call center does track the number of calls regarding smart meters.  However, it does not keep track of calls related just to inaccurate bills and smart meters. From January to March of this year, the call center received 3,259 contacts overall, and 57 of those were smart meter contacts.