BATTLE CREEK, Mich - Three suspects are being held on multi-million dollar bonds following a bank robbery on Saturday that led to a police chase and shootout in Battle Creek.

Robert Terrell Williams, 40, is charged with three counts of armed robbery, felony firearm, being a felon in possession of a firearm and felonious assault.  He's being held in the Calhoun County Jail on $10 million bond.  Investigators say Williams suffered a gunshot wound to the hand following a shootout with police on Saturday morning, treated and released from the hospital the same day.

Williams online record with the Michigan Department of Corrections details past convictions for felony drug offenses which he pleaded guilty to out of Genesee County.  He was discharged from prison in March 2015.

The third suspect was identified by authorities as Whitney Patrice Hampton, 29, who's also charged with three counts of armed robbery along with fleeing and eluding police.  She's also being held in the Calhoun County jail on $5 million bond.

The three suspects were taken into custody in the area of Cherry and Elm Streets in Battle Creek after gunfire was exchanged between the suspects and responding officers Saturday morning.  Williams was the only person to suffer an injury in the exchange, a hand wound, police say.

Officer Andrew Winer and Sergeant Kurt Roth both remain on paid administrative leave as state and federal authorities complete their investigation, which is standard operating procedure in this type of incident.

Battle Creek Police say Sgt. Kurt Roth was the only officer to fire shots during the incident. 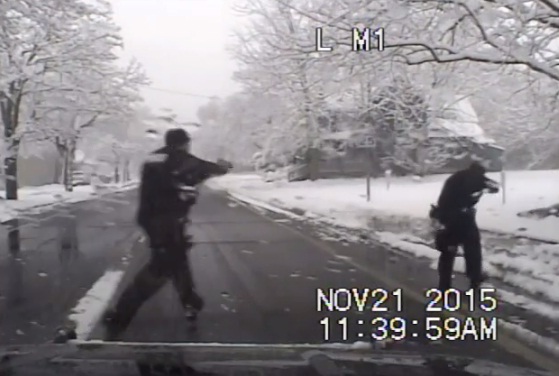 Prior to the shootout, several officers were involved in a police pursuit with the suspects after an attempted traffic stop in Battle Creek on Saturday morning.  Police say they attempted to stop the suspect vehicle after the vehicle and the people inside matched suspect descriptions given to officers following a bank robbery in the 2000 block of Capital Avenue SW around 11:30 a.m.

Video released by the Battle Creek Police Department shows a door opening on the suspect vehicle several times during the pursuit, with an officer calling out "shots fired".

Investigators say no one was hurt during the pursuit, or during the initial bank robbery.

The Calhoun County Prosecutor will work with state and federal authorities as the investigation proceeds.